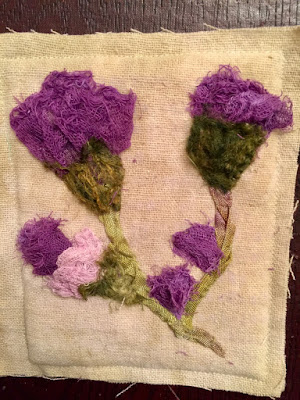 A funny thing happened on my way to a relaxing afternoon of hand stitching on Saturday.  Not five minutes after uploading my last blog post, I was heading down cellar to finish painting the dowel hanger for the "Loon Lake" wall hanging which I was bringing as a hostess gift on Sunday. Well, as I reached the bottom step, I heard a sound which strikes fear in the hearts of homeowners everywhere . . . . water was dripping somewhere. I had been down cellar the previous night, but at 1:00 on Saturday, there was water dripping from the ceiling. Not a gentle drip . . . drip . . . drip . . .  but rather, a steady plunk . . . plunk . . . plunk. I put down buckets and ran for the phone to call the plumber. When I hadn't heard back in a couple of hours, I tried another plumber. What do you think the chances would be of hearing back from a plumber the Saturday afternoon before Easter? If you think, pretty slim, you would be right.

There was no sign of water under the kitchen sink, or in any of the bathrooms, or near the dishwasher. I have an old fashion double sink in the cellar, so the buckets were easy to periodically dump. The scary part was that the water was dripping from the rafters near one of the sinks. I could see that a section of the sub floor (under the kitchen floor) was soaked. That was a very bad sign, but I didn't panic.

There are many terrible things associated with having battled cancer, but it does teach you to keep things in perspective. No matter how bad the situation might be; it wasn't cancer. No matter what,  no matter how bad it was, problems could be fixed.

I went back upstairs and sat down to stitch. Later, I got a bright idea. I had a 2' by 6' piece of plywood which I angled so that the dripping water would run down the plywood and directly into the sink. No more dumping buckets.

A truly wonderful thing happened on Easter. The second plumber who I had contacted called me. I explained the problem, and he responded that he lived fairly close by and that he would be over in ten minutes to take a look. He checked everywhere and looked puzzled. Then he located the problem; a tiny section of pipe which ran above the sinks had corroded and the water was actually shooting straight up hitting the rafters and joists and then dripping back down. He replaced a length of the pipe and the problem was fixed!!! I told him that I had been afraid that he would have to go up through the kitchen floor to try to locate the source of the leak. He smiled and said that was what he had been afraid of, too! Usually situations like this are a big, big problem.

Though the floor boards and joists above the sinks were sodden, he said that they would be okay when they dried. . . another concern alleviated. Whew!  Today was spent cleaning and finishing the drying process with every fan I could find in my house, but you won't hear me complain. In fact, I had a smile on my face realizing just how incredibly lucky I had been.

One suggestion . . . be sure you know where your main shut off is to turn off all of the water. The individual faucet knobs wouldn't budge but before leaving the plumber showed me where the main shut off valve was and how to turn off all the water in the house. Let's hope I never need to use this information.  :-)

The photo at the top is of one of the pages I have completed from the online Fiber on a Whim workshop "Layered Pages" which I have been enjoying. It was a six-week workshop with a weekly video and handouts which explored stitching, embellishing, and surface design . . . all elements that I love.

I hope you all had an uneventful weekend. :-)

Email ThisBlogThis!Share to TwitterShare to FacebookShare to Pinterest
Labels: Layered pages. Fiber on a Whim

Janice, So glad you water problem was fixed quickly and you didn't have to replace any floors. And you got a plumber to come out so quickly. I've had my issues with water too, but I wasn't quite as calm as you are. Maybe I can learn a lesson from you! Love your stitched piece.

I am so sorry you had that problem but so glad there are lovely people out there willing to come help even around holiday time. Aren't you smart figuring out how to angle that wood into the sink, brilliant. Hope you are all dried up now and ready to stitch some more.