Snowing and Blowing - The Blizzard of 2015 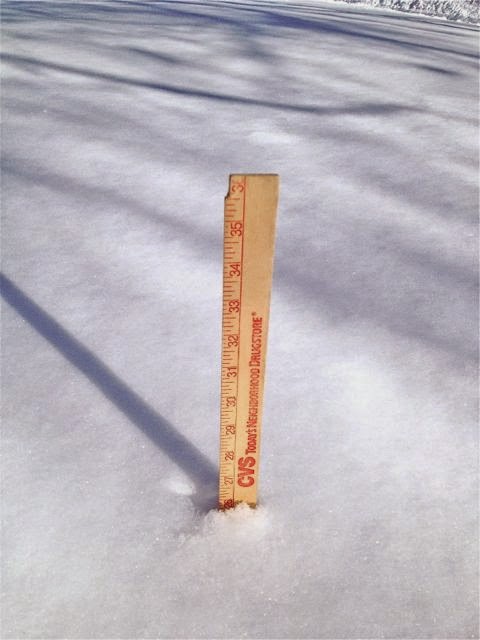 Yes, the meteorologists were right. There was a whole lot of snowing and blowing going on for the last two days. Now the sun is shining and it's time to shovel. In fact, I just came in from tackling part of my driveway. With my trusty yardstick, I measured the snow in several places. The lowest measurement was 22.5. The third of the driveway closest to the street measured 30.5, and the middle section measured 26.5.  I'll try to post a few photos later after the shoveling is done.
Update: The driveway is done!!!!!!! After that workout, I won't have to go to the gym for at least a few days. Thankfully, the snow was light but very deep.There is a drift behind my garage that has buried the picnic table, and I'm thinking it's probably four feet deep. I took this photo from the side yard. The snow on this side is probably three feet. 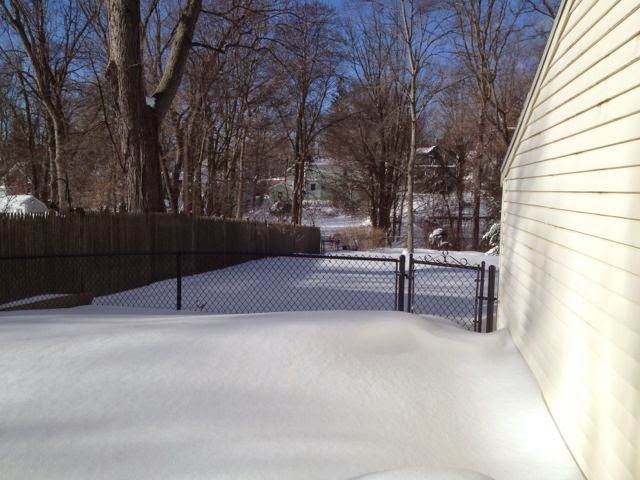 The metereologists are hinting at a few more possible storms. Where will we put the snow????

Email ThisBlogThis!Share to TwitterShare to FacebookShare to Pinterest
Labels: Blizzard of 2015 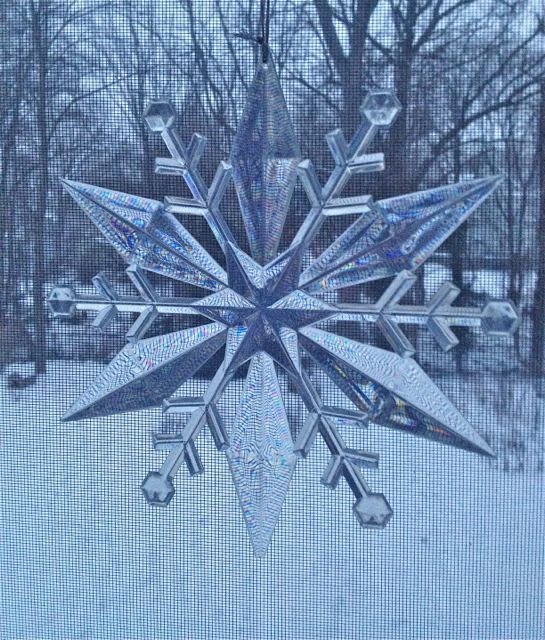 Oh my goodness!!! We're in for it !!! Words heard all day that you never want to hear from meteorologists . . .

A Potential Storm of Historic Proportions

One for the record books

It's enough to give even hardy New Englanders pause.  Driving home from my flute lesson this morning I passed an ominous highway sign flashing  . . .

Well, I hit the grocery store yesterday and I've battened down the hatches, so now it's just a matter of waiting. . . Stay safe and warm everyone.

Posted by Janice Smith at 2:31 PM No comments:

Email ThisBlogThis!Share to TwitterShare to FacebookShare to Pinterest
Labels: Blizzard of 2015 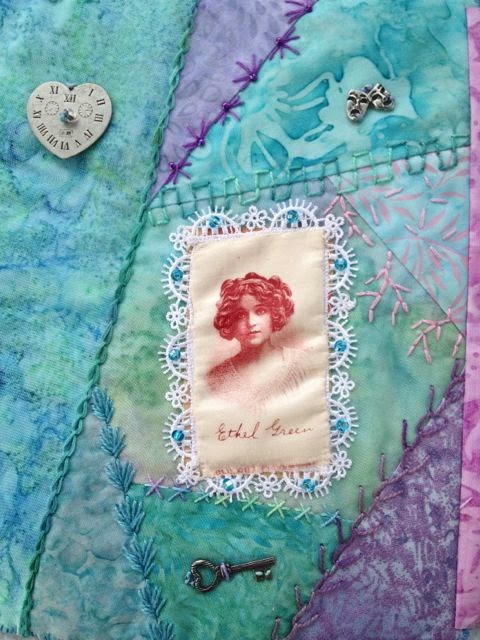 I have finished the final two crazy quilt blocks featuring turn of the century actresses. Actually, the above block has been done for a while, but I decided that the cigarette silk which had been sewn into the piece was too faded and frayed. Thus, I decided to search on eBay for a replacement and found this one featuring the lovely Ethel Green. I didn't want to have to remove the white lace and beads, so I  appliquéd the new silk piece over the existing one. It's not perfect, but it looks fine.
Searching for biographical info on Ethel Green, I came across an article "Orpheum Stars Wage Struggle for Beauty." The short article discusses the unofficial contest waged by fans of two beautiful actresses (one being Ethel Green) and offers each actress's beauty secret. What were their secrets? You'll have to read the article to find out. :-)

The actress below is Maud Lambert. I wasn't able to find much info on her career, but she did appear in the 1944 film, A Canterbury Tale. An excerpt from a  review of a 1901 Broadway show "King Dodo," says "The queenly Maud Lambert gives excellent musical value to a leading role and William Norris is exceedingly funny." 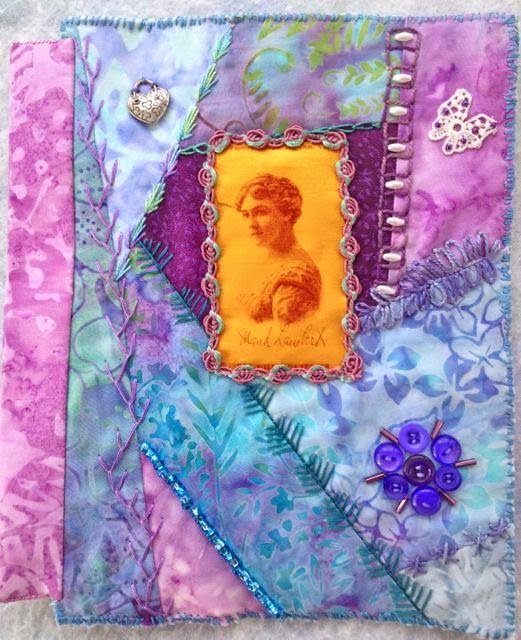 Now I just have to make a cover and settle on a way to lace the pages of this crazy quilt book together . One method might be using buttonholes or another could be by adding eyelets.

Finally, here's why I don't accomplish nearly as much as I set out to do.  After going to church and then food shopping this morning, I had planned to spend the whole afternoon sewing, but . . . the sky was sunny and bright and the thermometer on my sunporch was reading 60 degrees. Emma and I decided to bask in the warmth for a few minutes. This was taken before we both ended up taking a little nap. :-) Oh well, a big snowstorm is forecast for Monday night into Tuesday, so it would have been an absolute crime not to have enjoyed the pause between the storms. 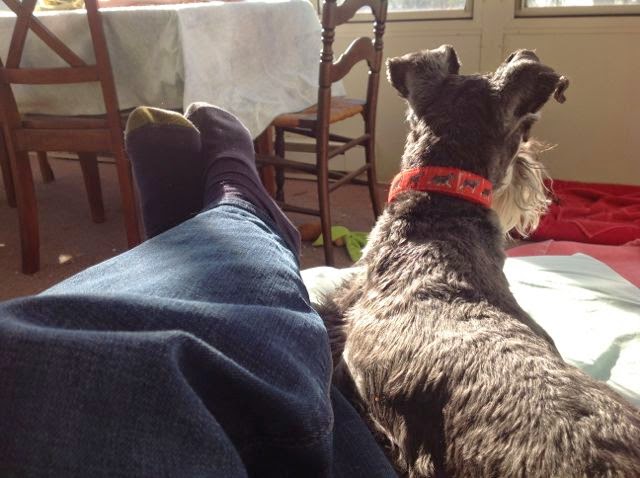 Posted by Janice Smith at 2:07 PM No comments: 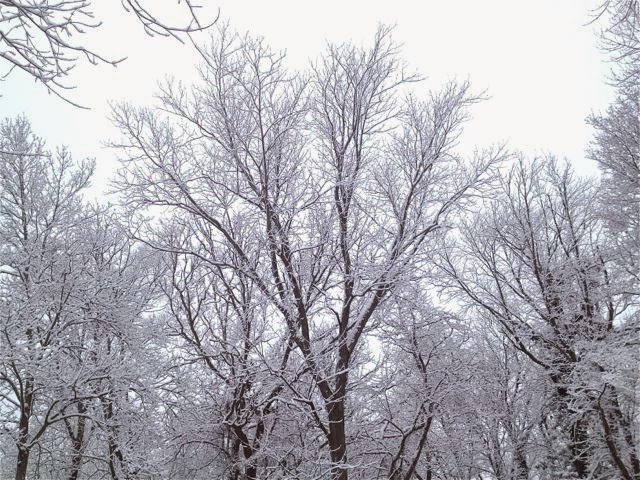 Emma and I awoke this morning to a winter wonderland in our backyard. The snow was steadily coming down under a pale grey sky, and Emma immediately began a tail-wagging, happy dance while I grabbed my iPhone to take these five photos. 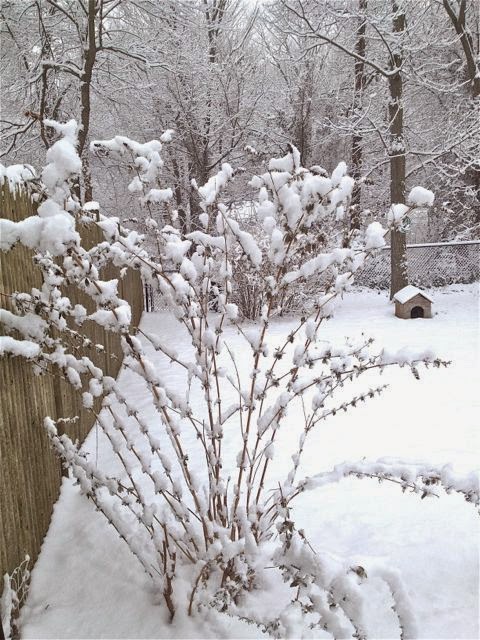 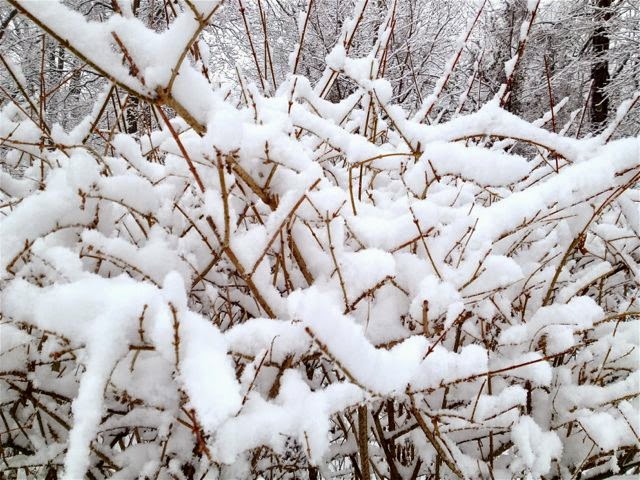 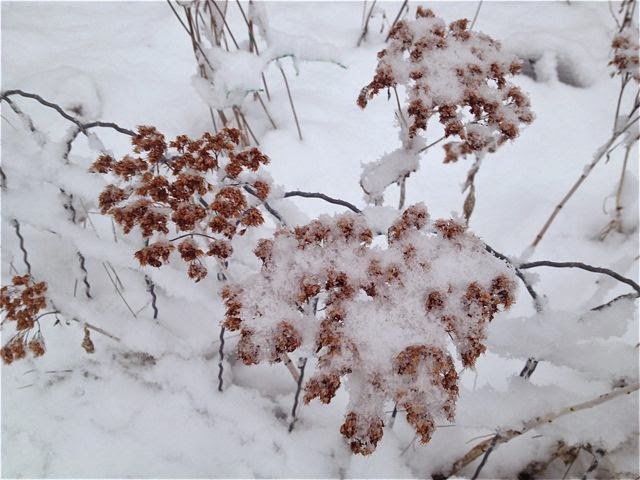 The one below is my favorite.  I was tempted to go get my "real" camera, but it was just too snowy. 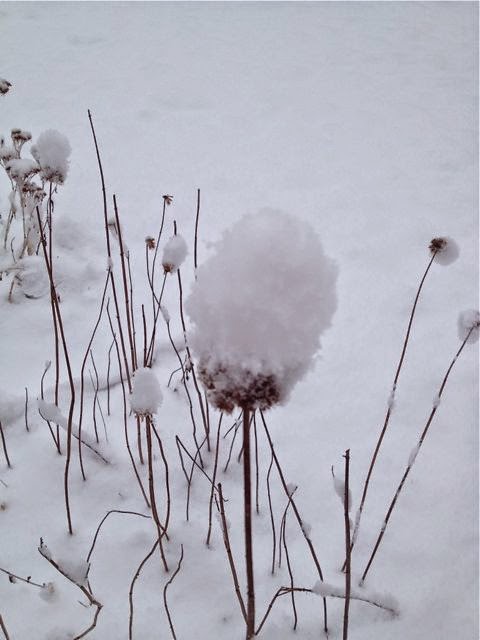 Yesterday it was in the forties . . . sunny and bright . . . such is life in New England.  Here's Emma  stretched out yesterday afternoon in a patch of sun on the sunporch. I love the shadow of her head and ears. 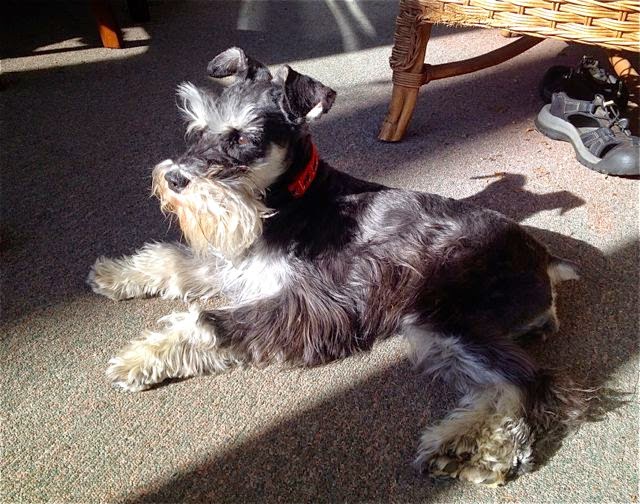 My friend Laurel had been here for a day of quilting. We went to breakfast first rather than stop for lunch and that gave us a long, productive period to quilt.

Posted by Janice Smith at 9:01 AM No comments: 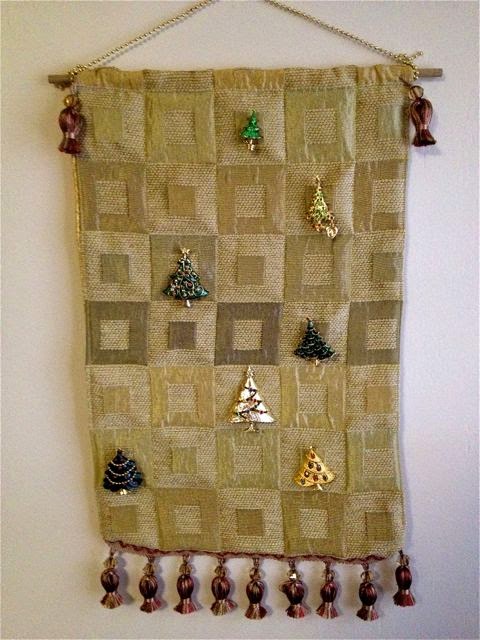 At the Crosstown Quilters Guild, members often leave quilting magazines, patterns, books and pieces of fabric on a back table for other members to take if they wish. When I spotted this gold fabric at our last meeting, I immediately had a plan. I love Christmas tree pins. Whenever I go to holiday bazaars, I keep my eyes out for them. For at least the last few years, I have been telling myself that I really needed some way to display my tiny collection.  This fabric was perfect. I added some trim, batting, a backing and then quilted around each of the larger squares. It was quick and easy and I love how it turned out. The best part is that there are lots of empty squares to fill as I add to my collection.
Posted by Janice Smith at 12:24 PM No comments: 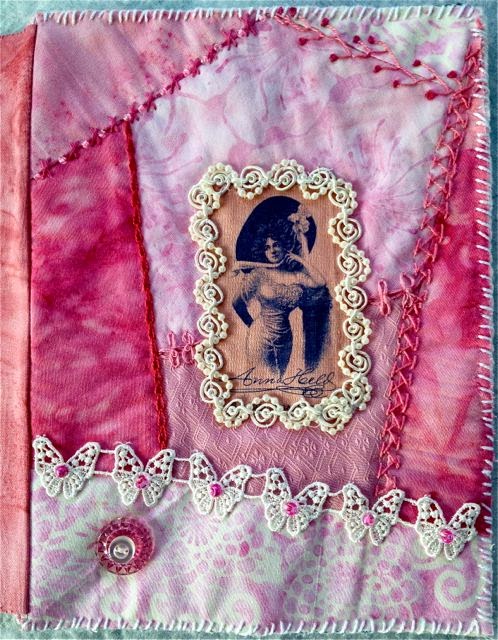 Last night I finished another page for my crazy quilt book. This actress is Anna Held. There is quite a bit of material on this flamboyant actress and her relationship with Florence Ziegfeld, impresario of the Ziegfled Follies. Besides being an actress, she earned a fortune endorsing products. To read more about her, click here. If you are interested, you may also check out this YouTube piece . . . "Anna Held 'The Brains Behind the Ziegfled Follies'" which features still photos from her many performances with the Follies. 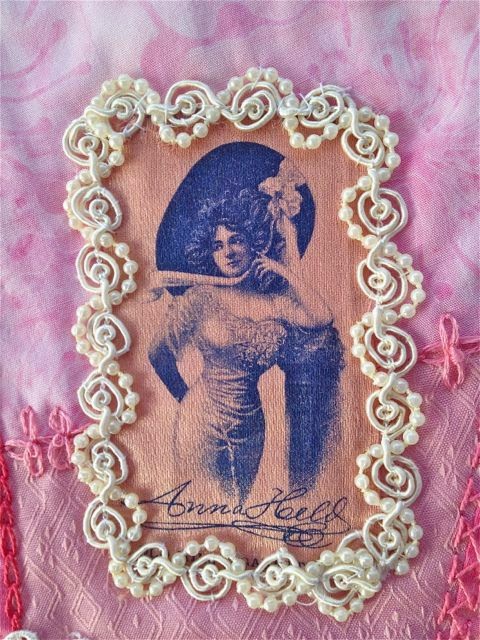 I have now completed five double sided pages with just two more blocks to do. 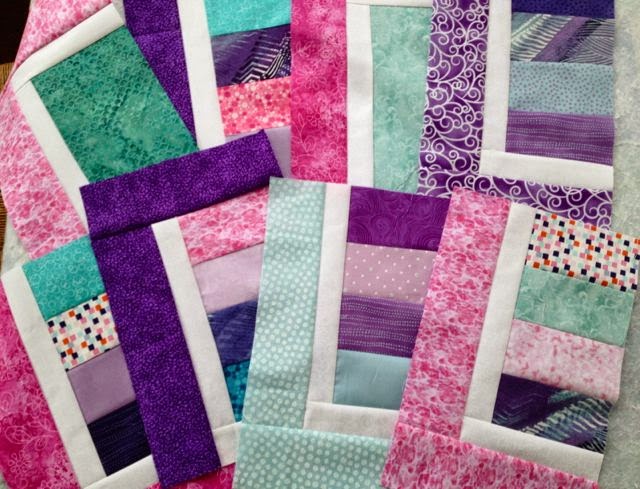 Work is progressing nicely on my latest quilt for one of my little cousins. The pattern is Urban Cabin by Atkinson Design. There will eventually be white sashing between the blocks. As you can see, this will be one very bright, happy quilt. Unfortunately, I don't think that I will have it completed in time for her birthday later this month, but she knows it will be done soon.

I haven't recommended a book here for quite a while. It's not that I haven't been reading, it's just that I haven't really read anything worth passing along. Then one day on another blog, I read about A Fine Romance - Falling in Love with the English Countryside by Susan Branch.  This book is a pure, complete, absolute delight! The author has created a visual diary of a wonderful adventure she had with  her husband crossing the Atlantic on the QE2  and then  spending two enchanting months exploring the English countryside. The illustrations are magical, and the reader is truly transported across the pond to the English countryside. I won't tell you any more so as not to spoil it, but please do yourself a favor and get this book. I loved it so much that rather than loan it out, I bought another copy for Christmas for my friend whom I knew would love it. I intend to tuck my copy away, and perhaps one day soon,  I, too, will visit the marvelous places that she describes.  It's an A+++++ book. :-)
Posted by Janice Smith at 12:56 PM No comments: 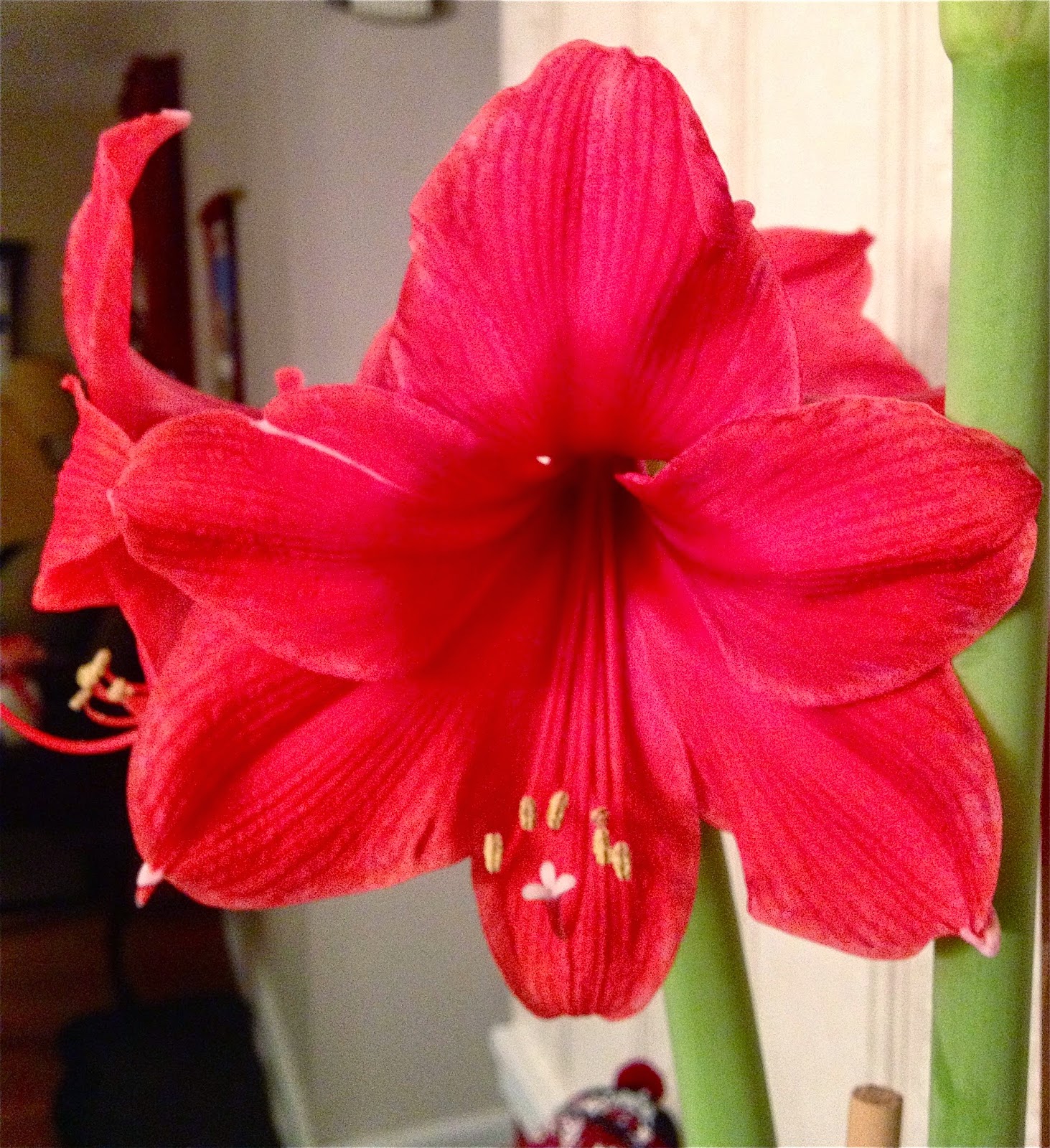 Brrrrrrrrrr . . . This morning started off in the low single digits and really didn't climb too much higher throughout the day. This amaryllis provided a tropical touch inside. These quick shots were taken with my iPhone. 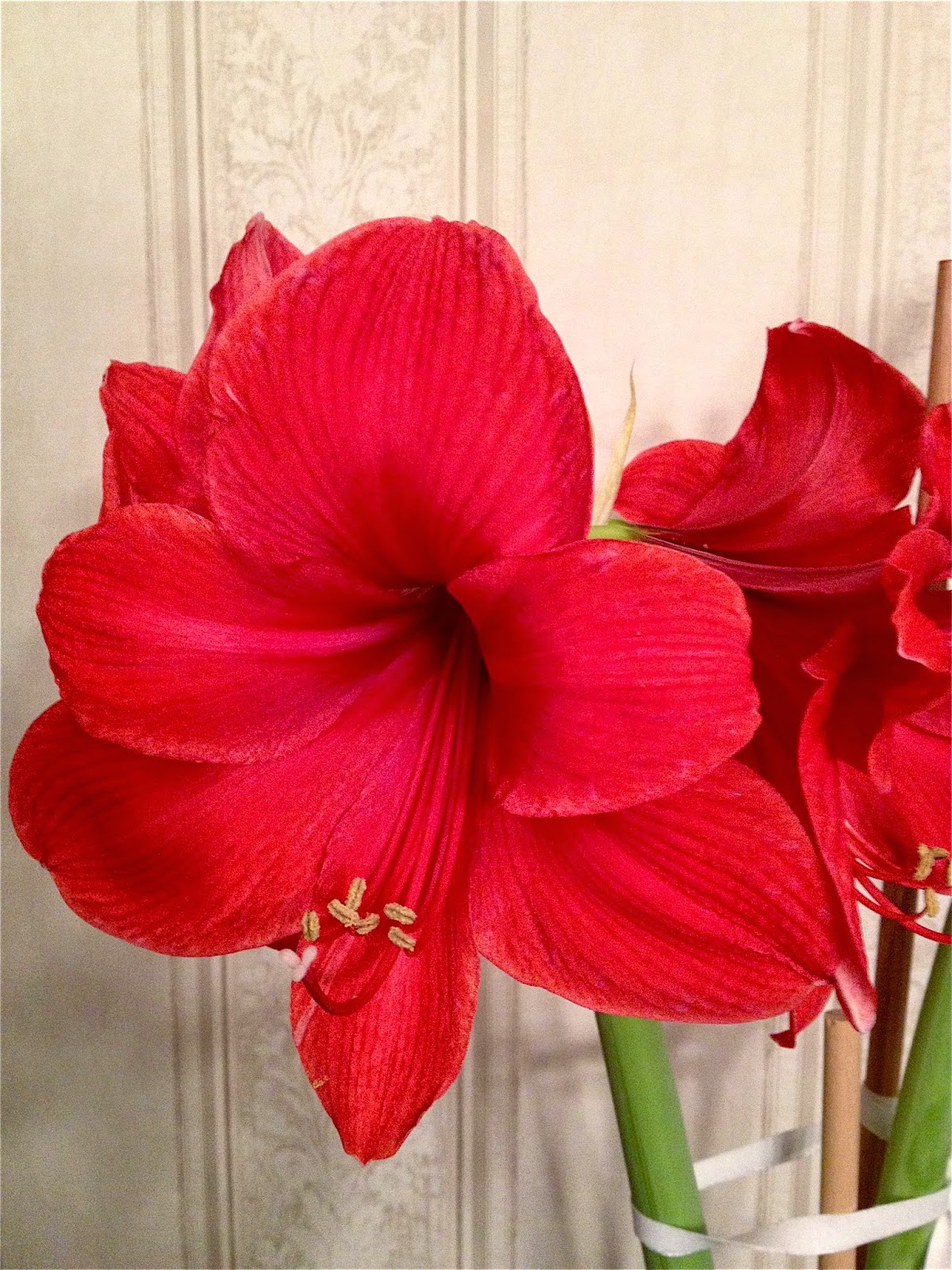 Before Christmas, many stores sell the bulbs for just a few dollars, and this year I purchased four of them. Every two or three weeks I will pot up another one so the bloom time is extended. There are four blooms on one stalk and more to come. 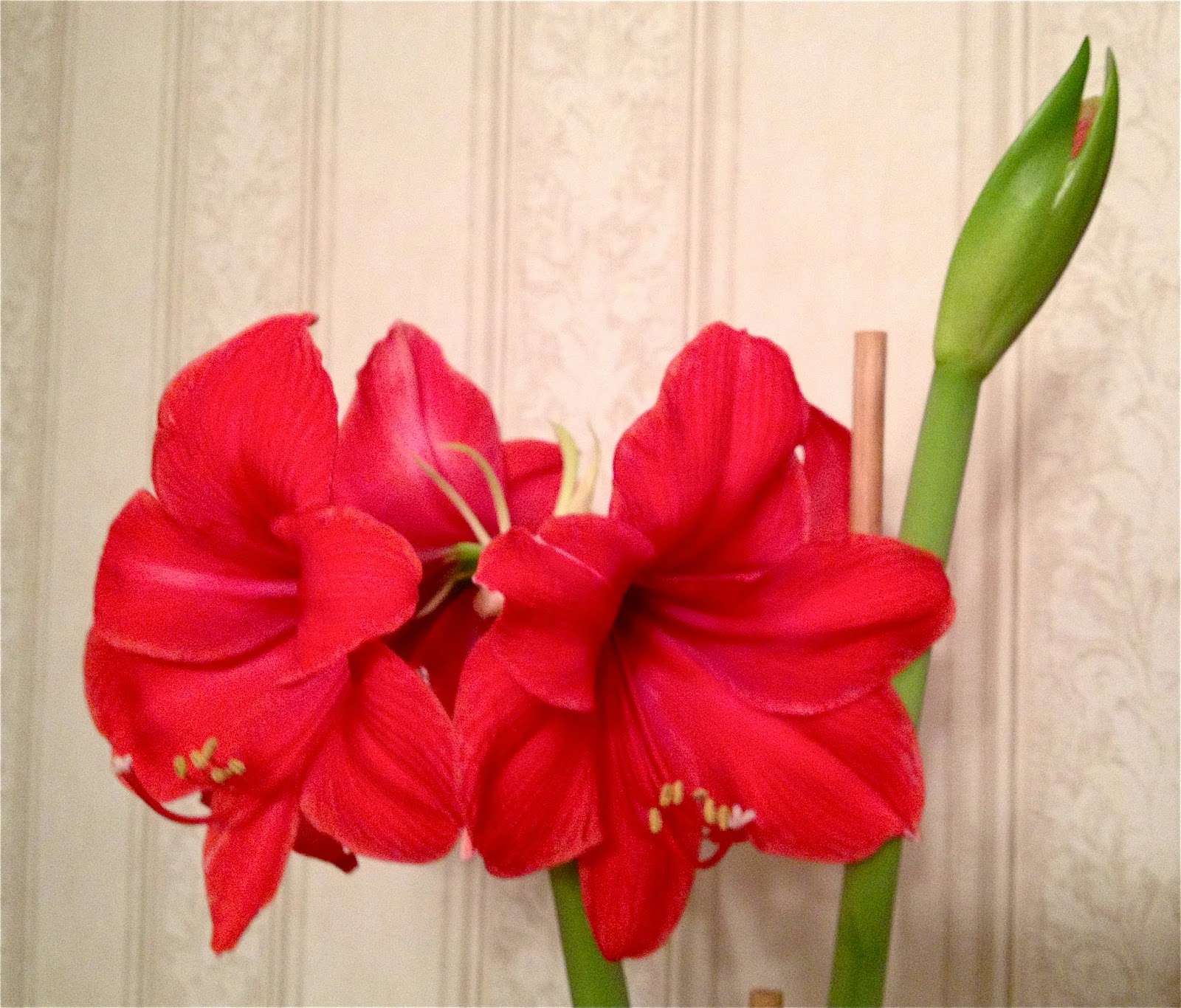 I haven't blogged as I have been busy packing away all of the Christmas decorations and as I have previously mentioned, I tend to go all out when it comes to decorating for the holidays. Fortunately, I now have winter decorations up to replace the colors of Christmas so the house doesn't look too dull. Yes, there are snowmen everywhere. :-)
Yesterday, my godchild and her girls came for "Ladies Lunch." They came bearing toys for Emma who recently turned three. Emma was beside herself with happiness . . . new toys and a visit from her favorite little girls.  We went to lunch at the neighborhood diner, played a few games of Mexican Train, and they each sewed a few pieces for the quilt I am making for the soon to be nine year old. It was their first time using a sewing machine and they did great! Here's the palette that she has selected for her quilt: turquoise, pink, and purple. I'll add white for the sashings to pull it all together. 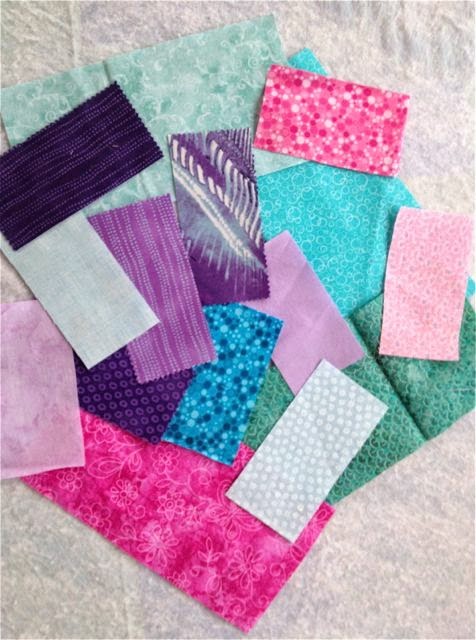 In the evening I got together with quilting friends . . . a lovely way to end a perfectly lovely day.

Posted by Janice Smith at 8:31 PM No comments: