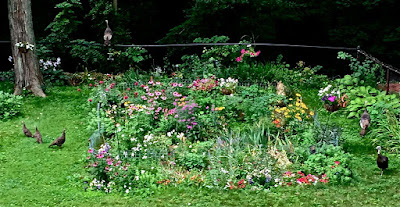 I looked out a bedroom window this morning and what did I see? Twenty odd turkeys visiting me!!! Really! This is getting to be ridiculous. 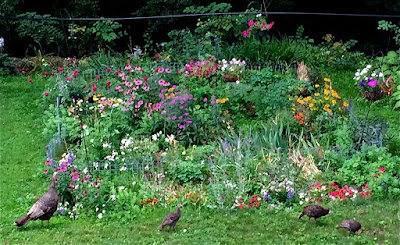 My iPhone was handy, so I leaned out the window and grabbed these shots. 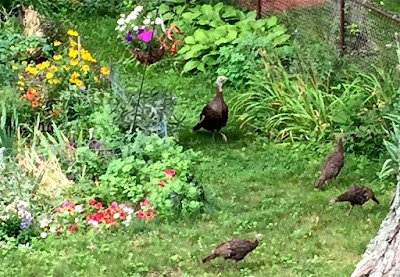 I'm sure they must have stopped by to see my garden as it does look pretty colorful this year. There were at least five or six making a closer inspection inside the garden. 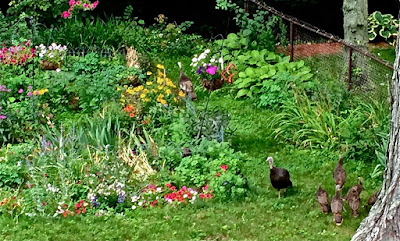 One of the adults walked back and forth along the fence as if it was a tightrope, but after a bit of Emma's barking, they flew into my neighbor's yard and then into the front yards. Next they proceeded to cross the street single file bringing the traffic to a halt. :-) 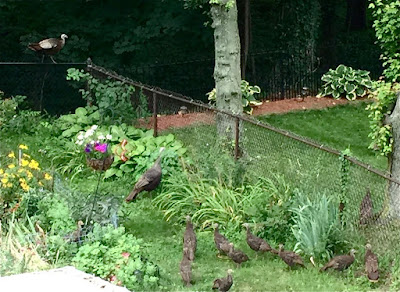 Posted by Janice Smith at 6:04 PM No comments:

Email ThisBlogThis!Share to TwitterShare to FacebookShare to Pinterest
Labels: Turkeys in my garden 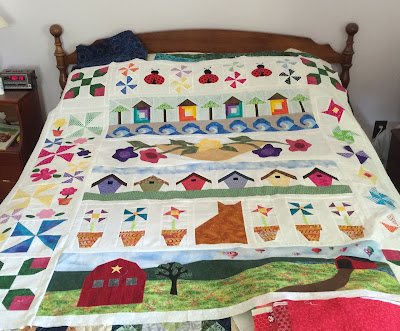 Whoopie!!! I have finally finished the quilt top from last year's "Row by Row Experience." Nine "row" patterns were used in the making of this quilt. I'm really happy with how bright and cheerful it is . . . a perfect summertime quilt.  I'm determined to layer and quilt this one myself, but I can't begin that process until I make two quilts for two of my little cousins.
Speaking of cousins, I had a great time yesterday afternoon when my cousin came for a visit with her  two little girls. Emma was equally thrilled to see them. Since it was really hot, all of us except Emma, headed to Hornstra Farm in Norwell for some scrumptious ice cream. Next, we checked out the new playground at the recently renovated Legion Field in Weymouth. The playground received two thumbs up, but without any shade we didn't stay there too long. Back at my house in the AC, we played a few rounds of Mexican Train which the girls really enjoy. They have created their own set of rules which I must say does move the game right along. They even have a dance to accompany the train sounds when the winner pushes the button on the "station" piece. Later, we went to Wollaston Beach and had dinner at Tony's Clam Shop. Their mom loved the lobster roll as did I, and the girls chose hot dogs. :-) Our finally stop of the evening was Wessaguset Beach where we searched for beach glass. As always, a good time was had by all! :-)

May the Force Be with You!!! 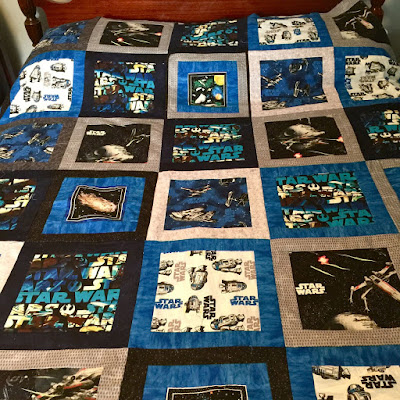 I have seven little cousins, the oldest of whom are triplets, and they will be turning ten in October. It doesn't seem possible! I'm working on making quilts for them, and as you can see, the boy will be getting a Star Wars themed quilt. His quilt top is finished and now it's time to start the quilt tops for the girls. I've decided to use the same pattern for both girls. As we have been visiting quilt shops"Row by Rowing," I've been purchasing fat quarters in a rainbow of colors. What a pile I have collected . . . probably enough for more than two quilts but the fabrics were simply irresistible! [In case you are not a quilter, let me explain that a fat quarter is a piece of fabric 18x22 inches.] 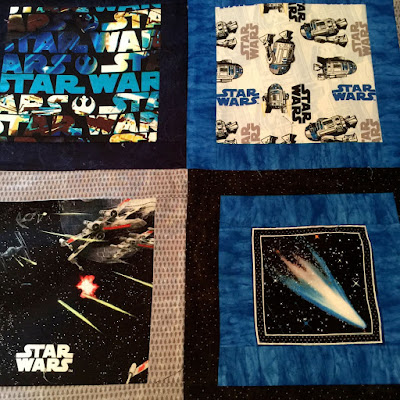 Whether you are a quilter or just know someone who is, take a few minutest and read a speech about quilting and quilters delivered by a criminal court judge in Calgary, Alberta, posted on another blog. It's a bit long, but it sure is funny.

Speaking of "Row by Rowing," I went with a friend to the Calico Cottage in Seekonk, MA, yesterday to pick up its row pattern and kit which features four brightly colored umbrellas in keeping with this year's 'Water' theme.

Let's hope the force is with me as I try to complete these three quilts in time for their October birthday.

Posted by Janice Smith at 6:24 PM No comments: 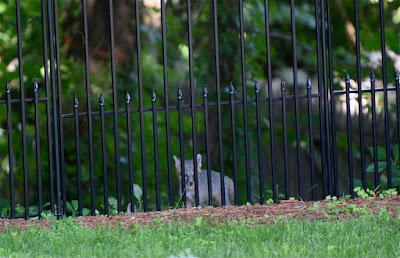 In the middle of the night, Emma alerted me to some strange sounds emanating from the woods behind my house. As many of you know, I live in the middle of beautiful downtown suburbia, but there is a small stretch of woods which spans about four or five houses. Followers of my blog will remember having seen photos posted of a hawk, raccoons, turkeys,  and a number of deer in these woods. Well, early this morning my neighbor called to tell me to look out as a family of foxes was playing behind her fence. 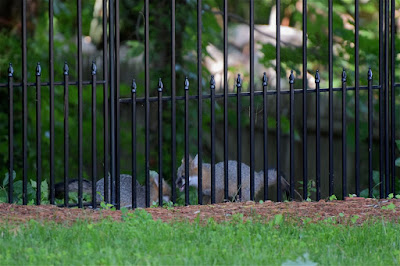 While the mom kept careful watch, the little one were wrestling and running up, down, and across the banking.  I counted four kits, though there may have been more. I took these shots from a very safe distance with my long lens while leaning over my fence. 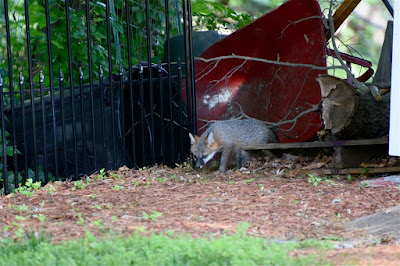 One even ventured briefly into the space between the end of the fence and my neighbor's shed. 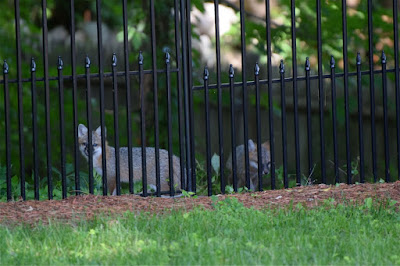 The kits were having a wonderful time scampering around and while I did enjoy seeing them, I would certainly prefer that they find somewhere else to live. This will no doubt happen soon when they get bigger although my research indicates that the mother may well return to the same den next spring.

Although I have a four foot chain link fence, obviously Emma is no longer allowed off leash in her own backyard.

Also, I didn't blog about it, but two weeks ago when I took Emma out early one morning, she ran to the corner of the backyard and began barking in a true, high level schnauzer frenzy. I went to investigate, and on the other side of the fence not more than three feet away was a creature at least twice her size. It had a flat, catlike face and small upright ears. It was making loud scary noises as I scooped Emma up and beat a hasty retreat to the house. The creature which I truly believe might have been a bobcat ran down the incline into the woods. Many have suggested that it might have been a fisher cat, but those have a more ugly weasel-like appearance and it wasn't a coyote either. It definitely had a flat, catlike face. I reported it, but I thankfully have not seen it since.

Email ThisBlogThis!Share to TwitterShare to FacebookShare to Pinterest
Labels: Foxes in the woods 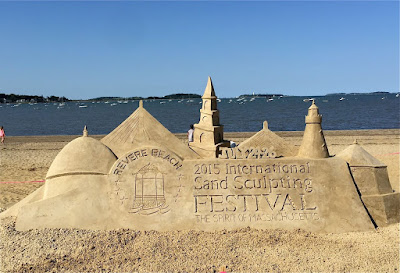 On the front page of today's Quincy Patriot Ledger there was an article about a group of three sculptors who over the last two days built this impressive sand castle. One sculptor is from Australia, another from Prince Edward Island, and the third from California. According to the article, twenty tons of special sand was dumped on Wollaston Beach at 8:00am on Wednesday. After reading the article, I headed to Quincy Shore Drive to see it for myself. The work had already been completed and the sculptors were gone when I arrived late this afternoon. The sand sculpture is promoting the upcoming Revere Beach International Sand Sculpture Festival next weekend, an event that I have always thought of attending but just never have.

After a long walk along the boardwalk, I stopped at Tony's Clam Shop to bring home a lobster roll. It was delicious!!!!!!!!!!!!!!!

Posted by Janice Smith at 3:56 PM No comments: 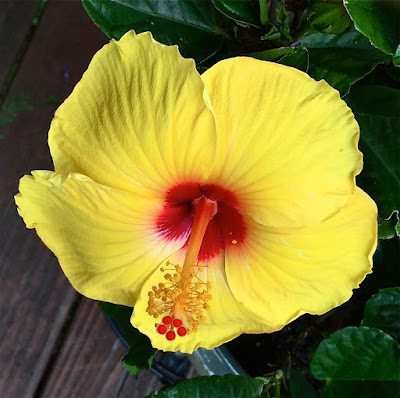 I spent three hours yesterday morning working in my gardens. This morning after church I spent some time photographing a Sunday sampler of what is blooming this week. 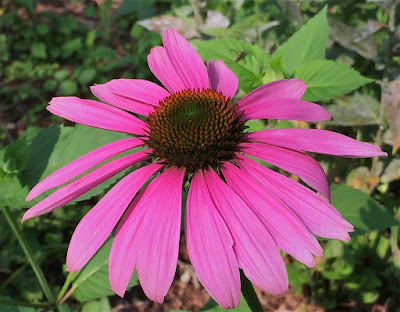 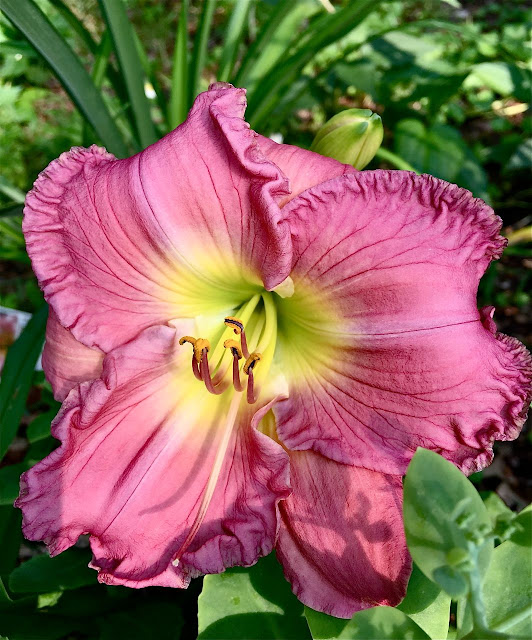 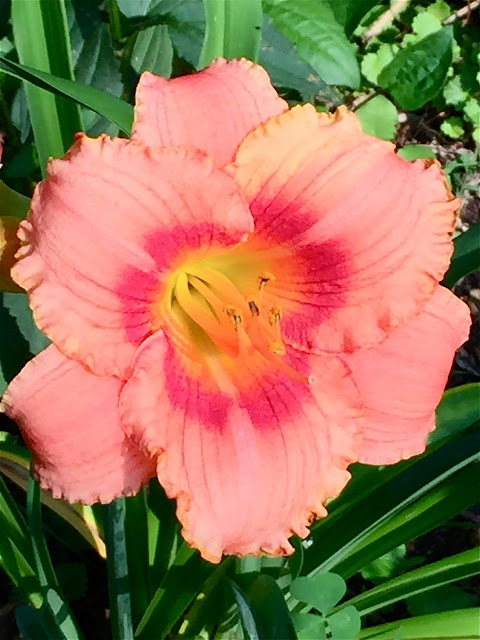 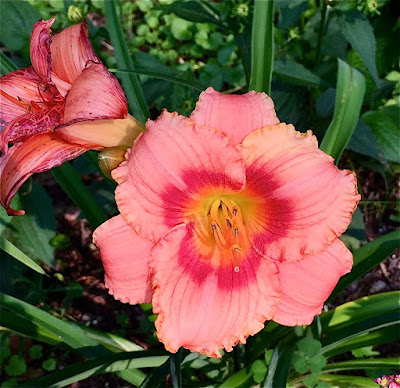 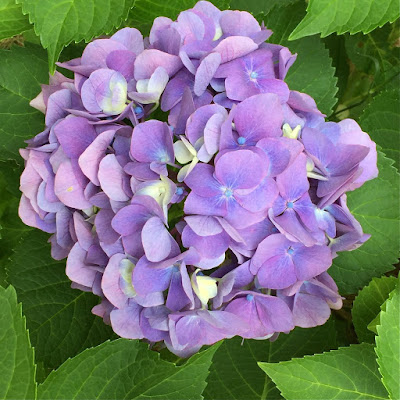 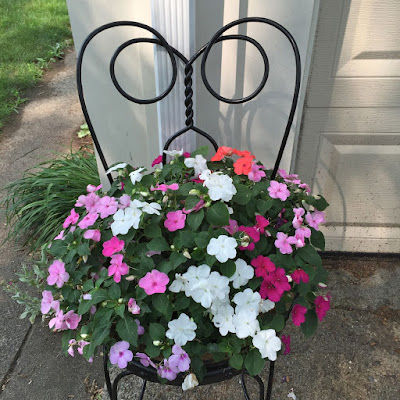 All photos in this post were taken with my iPhone 6 plus. I continue to be amazed by the quality of the images that it allows me to quickly take.
Posted by Janice Smith at 6:59 PM No comments:

A Touch of Bling 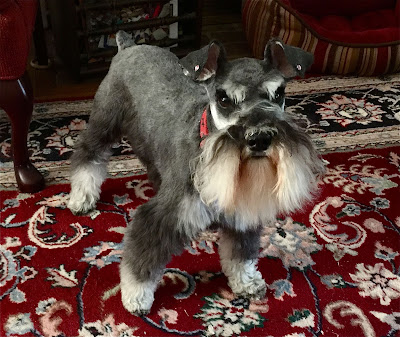 Here's Miss Emma just back from the groomers. She is sporting some stick-on pink bling on the tips of her ears. Very fashionable! They will fall off in a day or two, but for now, it looks pretty cute. 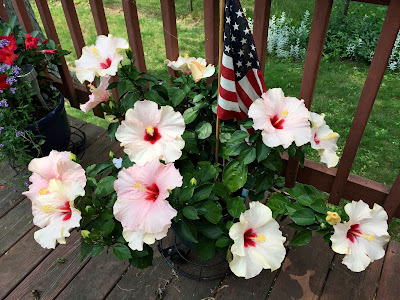 I wanted to post another photo of the hibiscus plant on my deck. Just look at all of those blossoms, and the buds keep coming. 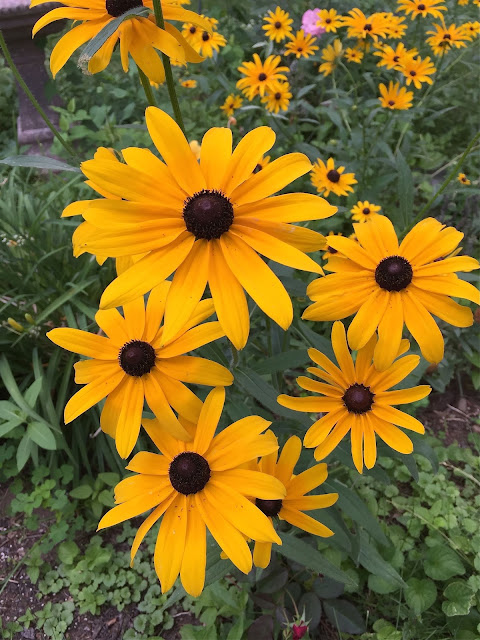 I lost a number of my perennials after this snowy winter, but the rudbeckia plants have really multiplied. The weeds seem to have also multiplied, but with the hot, humid weather that we have been having removing them will just have to wait.
Posted by Janice Smith at 3:25 PM No comments: 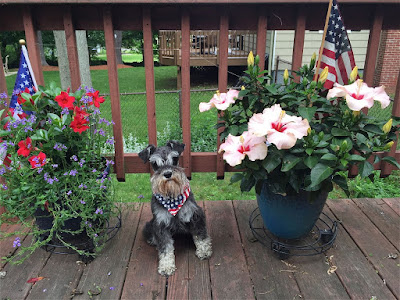 Emma, wearing her patriotic bandanna, is ready for an afternoon of fun. 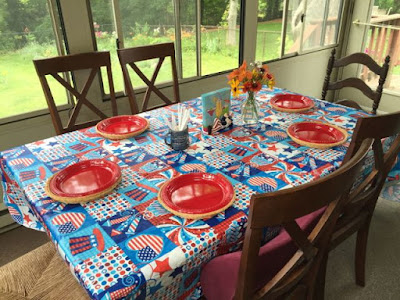 The table is set and friends should be arriving shortly. Last night I went with a friend to the Randolph parade which was great fun.  .  .  marching bands, antique cars, motorcycles, flags, etc.
Posted by Janice Smith at 9:35 AM No comments: