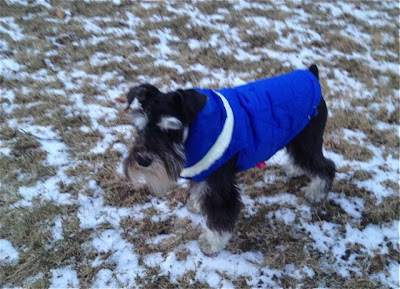 Sunday afternoon was great as I attended Miss L.'s  Hello Kitty 7th birthday party!!! All seven of my adorable young cousins were there, and a great time was had by all. I left in time to come home, get comfy, and watch the New England Patriots take on the Baltimore Ravens. Things didn't go as hoped, and groans could be heard in households throughout New England as our team went down to defeat :-(

On a higher note, yesterday our country had a celebration of our democracy. It was a glorious day in Washington, and though the TV coverage was wonderful, I wish that I had been there in person to see history being made at the 57th Inauguration. The ceremony from beginning to end was glorious and made me proud to be an American.

I didn't see the parade as I went to a get-together at a friend's condo. There was lots of yummy food, good conversation, and a fun game called "30 Seconds" which challenged the old brain cells. Snow had been predicted for the overnight, but the forecasts of 3" to 6"inches proved to be wrong. It was a surprise this morning to see that we had received merely a dusting. That's fine with me as it would have been pretty darn cold out there shoveling. Friday holds the promise of the next snow storm.

Speaking of snow, here's a photo that I just took. Brother, it's c-o-l-d outside!!!  Bitter cold air is racing down from Canada coupled with a nasty wind chill for tomorrow and Thursday. I had picked up this little blue quilted jacket on sale for an unbelievable $2.98! It  even has a small snap pocket on the back. H'mmm. . . do you think that's for Emma to carry her cell phone?
Posted by Janice Smith at 1:01 PM 1 comment: 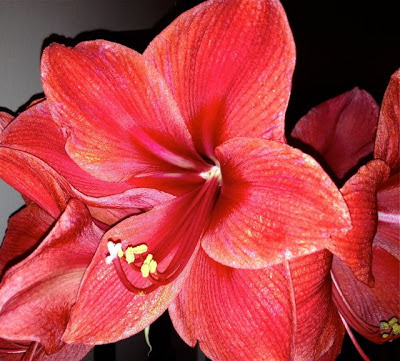 We've had a full range of weather in the last few days. Sunday the temperature was in the high fifties, a truly gorgeous day. In the afternoon I attended a program at a local quilt shop and later  attended a reunion pot luck supper with fellow travelers from our amazing trip to Italy. The get-together was great fun, and we heard a bit about next year's proposed return trip to Italy. 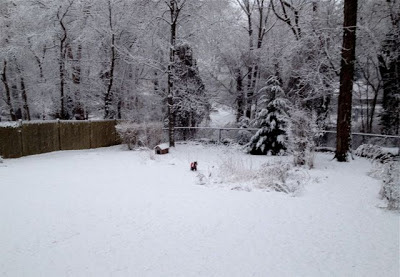 This was the scene on Tuesday morning. Though it snowed only a few hours, it managed to create a beautiful blanket of white. The pristine conditions, however, didn't last long with Emma dashing madly about. She loves the snow! 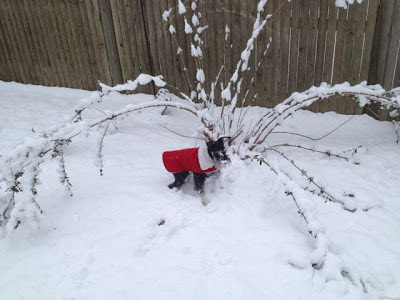 Two days later the snow is now practically all gone. You have to love New England's ever changing weather!!!
Posted by Janice Smith at 6:25 PM No comments: 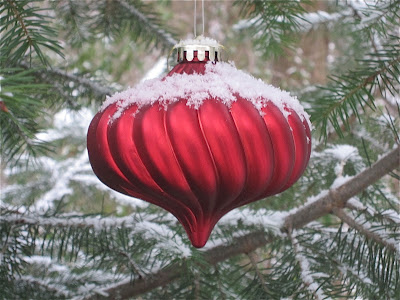 I can't believe that I haven't posted since the day before Christmas; the time seemed to go by all too fast. Let me start by wishing one and all a very happy, healthy, adventurous 2013.
I had a stomach bug for a few days last week which kept me from taking down my holiday decorations. Before I finish packing the last of the inside decorations away, I thought I would take a moment to share these photos which were taken during Christmas week of some ornaments from the pine tree in my backyard . 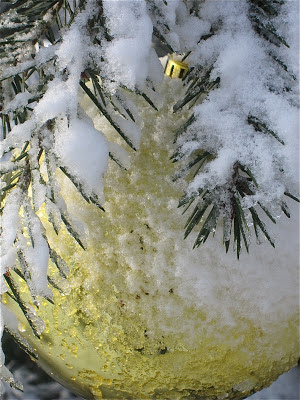 If I'm not careful, I often get my own reflection in the shot as in this one. 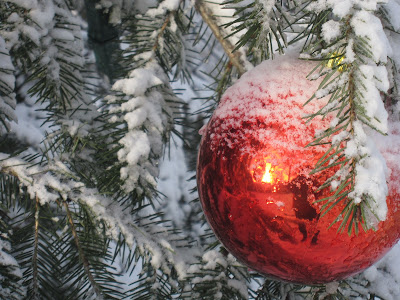 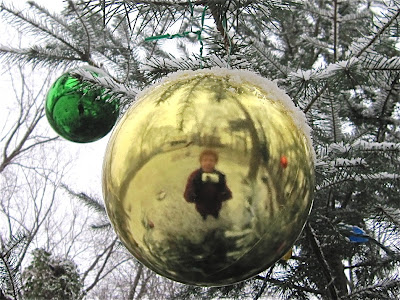 Most of the snow has melted away, and the the weather people are hinting that we may be in the upper fifties over the weekend. That could only mean one thing, Mother Nature must have a blizzard waiting up her sleeve and the warm weather is just a trick!!! Trick or not, I can't wait to temporarily ditch the hats, scarves, and gloves if only for a day or two.

Posted by Janice Smith at 12:30 PM No comments: