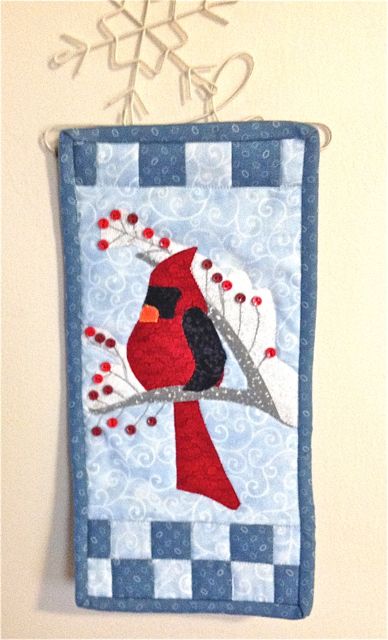 Here's one of the gifts that I made for Christmas. My neighbors enjoy feeding the birds so I thought this little 6"x12" quilted wall hanging would be perfect.  The pattern had caught my eye last spring when I saw it made up in a quilt shop in New Hampshire, and yes, I have a duplicate one cut and ready to sew for me. :-) I love that I found a package of tiny buttons with both bright and dark buttons to embellish the piece. Here's the pattern info in case you are interested. 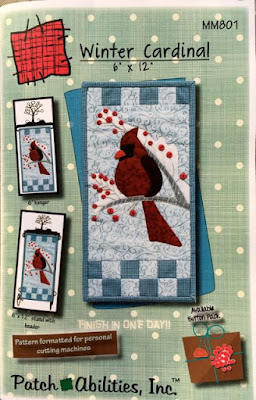 I hope you had a perfectly lovely Christmas. I spent Christmas Eve and Christmas Day with family, and it was wonderful. It's always fun to watch my little cousins open the gifts that I have selected for them. A highlight was the remote control race car with sound and flashing lights that would zip across the floor or even more exciting, climb the wall!!! It was a definite hit with the seven year old. :-) I have a cute photo of him and his four year old brother looking up as the car climbed up to the ceiling. The little guy asked if I would get him one to which his brother said, "No, you're too little; you have to be mature to use this toy. :-)  :-)  His little brother had been given a set of mini dinotrucks which he did like. And of course, having been an English teacher, everyone gets books including their moms.
Posted by Janice Smith at 12:48 PM 4 comments: It's hard to believe that it is the eve of Christmas Eve.  I normally decorate two large trees: one for the living room and one on the sunporch, but not this year. I already had a two foot green tree where I have always displayed my White House Historical Association ornaments, but the green color never seemed to set the ornaments off. So, this year I ordered a two foot white tree and I love how the ornaments look on this one. Next year when I put up my big trees, I may put this one in the front window. 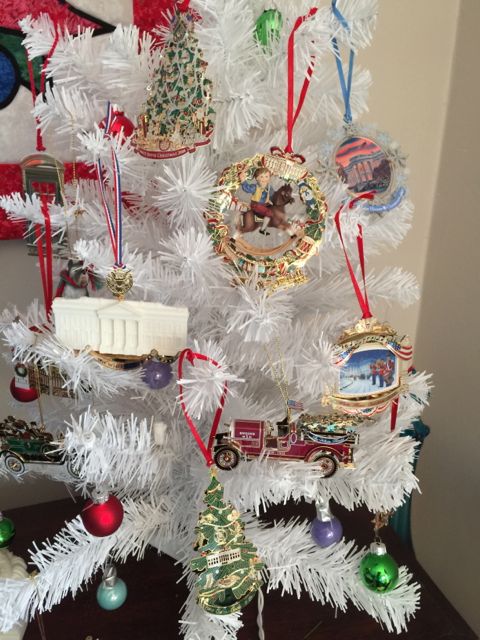 One small schnauzer ornament also hangs on this tree. 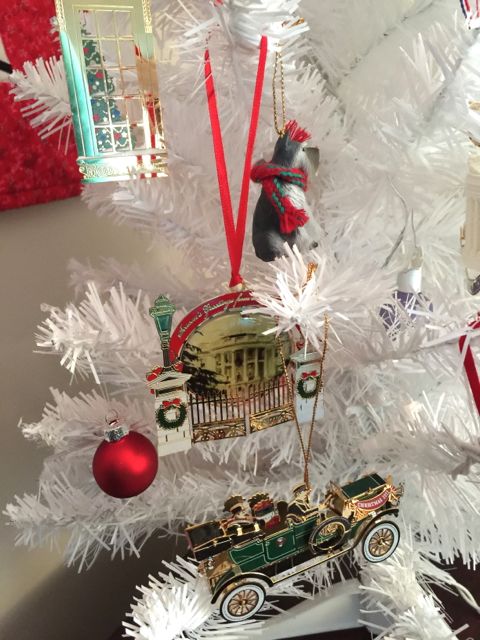 Let me take this opportunity to wish you a Merry Christmas and a happy, healthy, and peaceful year ahead.  This year the eight days of Hanukkah begin on December 24th. Happy Holidays to us all.
Posted by Janice Smith at 8:44 PM 1 comment: 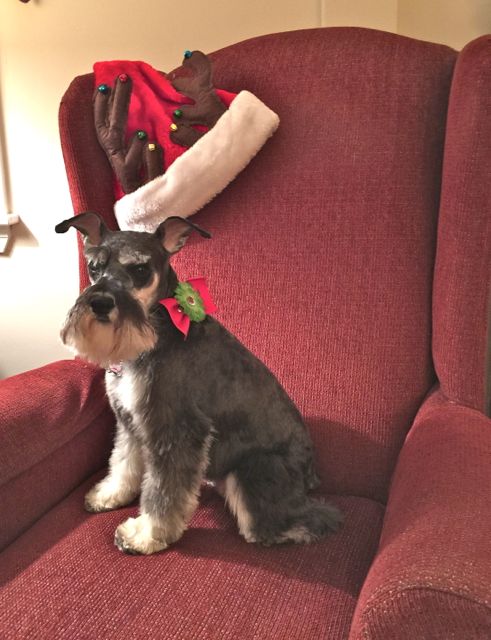 For Emma fans, here she is just home from the groomer, Pooch Paws in Rockland, sporting a festive holiday bow. It doesn't seem possible that Emma will be turning four at the end of this month. Now please understand, she doesn't normally get to sit on the furniture unless she is on my lap. I just wanted to grab a quick shot before she had her supper. A wet, messy schnauzer beard wouldn't lend quite the same effect. :-)
Posted by Janice Smith at 3:36 PM 1 comment: 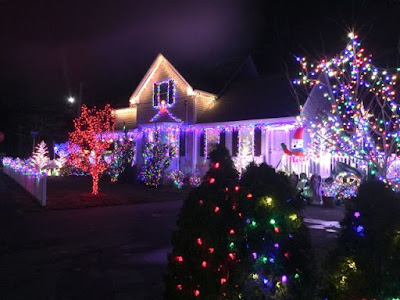 I went to a family party on Sunday, and on the way home I passed this incredible display in Braintree.  Isn't it absolutely glorious!!! This is only the view from the side yard as the front was on a very busy main road. I had parked on the side street, and it was too far to hobble around to the front. 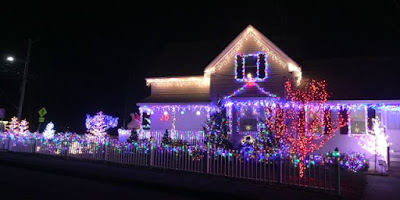 Since my last post, I went out for a holiday dinner with quilting friends, had lunch with some retired teacher friends, and wrapped and bagged all of the gifts that I am giving. Thank goodness for online shopping! I was also supposed to see friends on Saturday, but our get together was postponed due to a snowstorm. By Sunday morning, the temperature was fifty and all of the snow had magically disappeared. Life in New England. . .

I still need to finish making two gifts; one is a small piece and the other a larger piece for my lovely godchild who asked for a Thanksgiving wall hanging, and who I know won't mind if it is a tiny bit late. After all, November is a long way off. :-)
Posted by Janice Smith at 7:38 PM 2 comments: 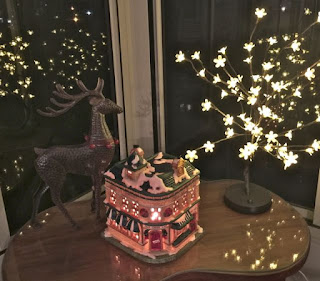 There is usually a Christmas tree in this spot on the sunporch, but not this year. It will return next year.

It's been a busy, fun week so far starting with a Herring Run Quilt Guild meeting on Saturday. The show and tell was wonderful as always, and we enjoyed a trunk show featuring the work of guild member Marianne Karpinski whose appliques quilts are truly beautiful.

Last night, nine members of the Dancing Queens met for a holiday dinner in Hingham. These lovely ladies were all Weymouth teachers. The first time we got together was back in 2008 when the movie, Mama Mia, came out, hence our group's name. Now we are all happily retired, but still get together on a regular basis. 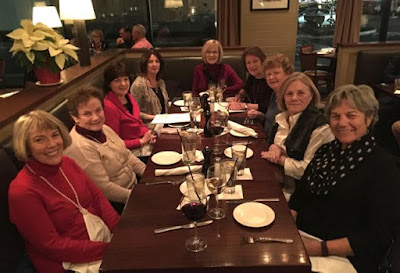 Today was the holiday meeting of the Crosstown Quilters and a fun time was had by all. I donated a Christmas basket with a quilting-themed mug mat, mug, pin holder, and stitch ripper. I came home with a jelly roll, thimbles, and a pin holder!

I still have three more things this week to look forward to. In between, I'm sewing for Christmas and keeping my feet up as much as possible. :-)
Posted by Janice Smith at 6:09 PM 1 comment:

Passing of an American Hero 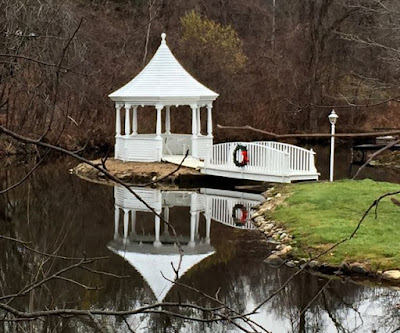 It has been a while since my last post. I have been working on a few quilting projects, but since they are Christmas gifts I haven't wanted to post any photos. The issues that I have have been having with my feet have cramped my style a bit and have put my photography on the back burner, so that also explains my lack of posting. My house is all holly and jolly thanks to my cousin and her little girls who last week came and lugged decorations and other things up from the cellar for me.  Since yesterday was an early release day from their school, they came for our monthly "Ladies Lunch" followed by our annual visit to The Christmas Place in Abington. I, for the most part, sat on a convenient bench while the girls each picked out this year's ornaments.

The passing of John Glenn prompted me to write this post. I was in grammar school when he made his historic flight in 1962. Young people today would have no idea of the impact that John Glenn and the other Mercury 7 astronauts had on our country. They were truly American heroes. When I was in college, John Glenn came to our campus as part of the speaker series. I attended most of these events, but I was never as excited as when John Glenn came. Flip ahead twenty to thirty years . . . I was with a group of eighth and ninth grade students on a trip to Washington D.C. and visiting the Smithsonian Air and Space Museum where we saw John Glenn's Mercury 7 space capsule. I remember trying to explain to them what a really big deal that flight had been.  We marveled had just how small and improbable that capsule appeared to be. Later that same afternoon or the next day we were at the Capitol listening to the guide talking about the features in the rotunda when a group of men passed through. One of the teacher suddenly remarked, "Oh, my, goodness that's Senator John Glenn!" I think it might even have been me. Senator Glenn turned, flashed a smile, nodded, and without missing a stride kept on moving. One of his aides paused briefly and said the senator would have stopped to greet the students, but he was rushing to cast a vote.

A few years ago, I read a biography of John Glenn. From his early years, to his days as a test pilot always pushing boundaries, to his becoming an astronaut and an American hero, and later a United States senator, he truly had the right stuff. Besides all that, the book showed him to be a very good and decent man. Godspeed, John Glenn.
Posted by Janice Smith at 9:25 PM 2 comments: