On Sunday afternoon,  I attended a lecture at Kennedy's Country Gardens in Scituate. The focus of the talk was on how to have success growing orchids, something that I would really like to be able to do well. The speaker was wonderful, and I scribbled down all of his helpful tips and suggestions. Of course, I couldn't leave the greenhouse without purchasing one, so here it is. 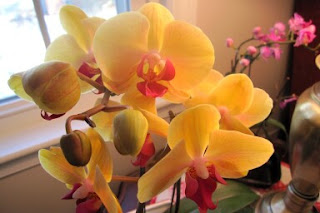 There's nothing quite like a greenhouse filled  with flowers to brighten one's spirits on a winter day.
Posted by Janice Smith at 7:36 PM No comments:

On Thursday, I went with friends to see an elegant little film, The King's Speech. The acting was absolutely brilliant, and it is clear to see why this movie has garnered twelve Academy Award nominations. There is very stiff competition this year, but both Colin Firth and Geoffrey Rush deserve to take home statues. My rating for this film is A; if you have not yet seen it, do so immediately. You won't regret it.
Posted by Janice Smith at 6:58 AM No comments:

My friends Donna, Edith and I fell in love with a BOM (Block of the Month) quilt being offered at Ann's Fabric in Canton, MA. The quilt is called "Joy," and it is from Whirligig Designs. (Doesn't the sound of the word, "whirligig" just make you want to smile? ) We picked up our first month's packet a couple of weeks ago and got together to work on the first blocks on Sunday at Donna's house. Fortunately, Edith had already assembled her first two blocks, so she coached and provided tips as we started ours. We needed to make two of the same blocks for January. 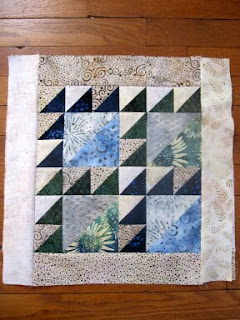 I finished my blocks yesterday as I spent the day quilting with my friend Laurel. With all of the snowy, stormy weather we have been having, we haven't been able to meet on as many Mondays as we would have liked, but yesterday was a lovely day. We quilted for a few hours, then walked to a diner for lunch, and then came back and quilted some more.
Before I close, let me share a photo of one of Donna's orchids that I took on Sunday. She has a wonderful knack for growing orchids. Isn't this one beautiful? 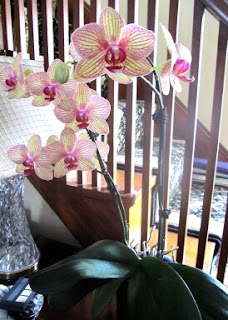 Posted by Janice Smith at 8:14 AM No comments:

Here's a table runner that I finished on Sunday morning.  It seemed a bit large for my table, so I added a sleeve and hung it on the front door. (Note to self: next time check the measurements before starting on a project.) Actually, I really like how it turned out, and it definitely provides a spot of cheer on a cold, grey day like today. 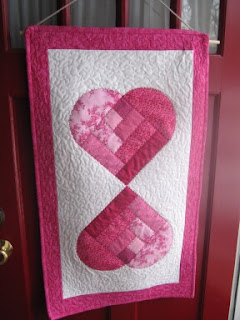 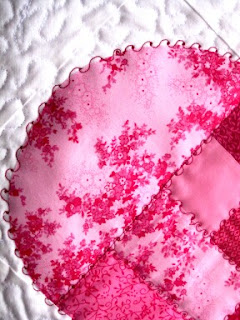 Abraham Lincoln's ancestors were early settlers of Hingham, MA, and this wonderful statue is near the town center. 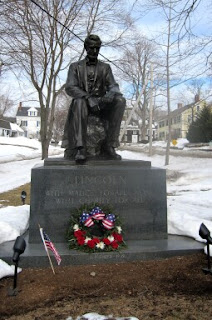 I have always been fascinated by Abraham Lincoln. I think I can trace it back to viewing John Ford's 1939 film, Young Mr. Lincoln which starred Henry Fonda. I couldn't have been more than ten, but I remember checking out and reading all of the books on Lincoln that they had in the children's section of the Tufts Library. That interest never waned and had I not been been an English Language Arts teacher, I would have loved to have taught American History.
The other day I read that Stephen Spielberg is set to begin filming Team of Rivals based on the Doris Kearns Goodwin book next fall. Originally, Liam Neeson was to play the coveted role, but since he changed his mind, Daniel Day-Lewis will star in the movie which will have a late 2012 release.
Today is also the birthday of my godchiild. . . Happy Birthday, KMR!
Posted by Janice Smith at 8:13 AM 1 comment:

Is it too soon to be thinking about Christmas? Two years ago I bought the book Deck the Halls by Cheryl Almgren Taylor and promptly started working  on the project shown on the front cover. I had the background pieces done and even one of the houses, but for some reason I abandoned the project to work on something else. Well, one of my resolutions this year is to try to complete some of the many projects that I have started.  I'm happy to report I have finished project #1. 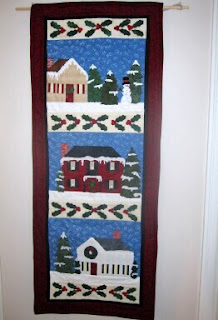 I'm not sure if it will show clearly in this photo, but each window of the middle house has a tiny little candle. I used orange embroidery floss to create the bulbs. 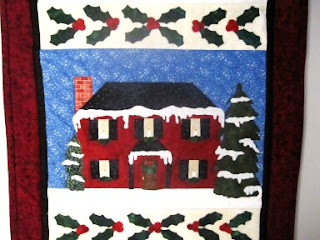 The book has ten wonderful projects. If time permits, I may also make the mantel runner from this  book.  Before I do that, however, I need to complete a Christmas quilt which I started four years ago featuring various Santas from around the world.
Posted by Janice Smith at 1:30 PM 2 comments:

A New Quilt Shop in Town

It stopped snowing long enough yesterday to check out the new quilt shop in town. Heart in Hands  opened on Feb. 1 during the midst of our most recent storm. I'd say that was a good omen as things can only get better  for them. The building is bright and airy and the owners are warm and friendly. Two of the owners are shown below, and the third owner was outside shoveling. For times and location, visit their webpage, heartinhandsquilts.com. 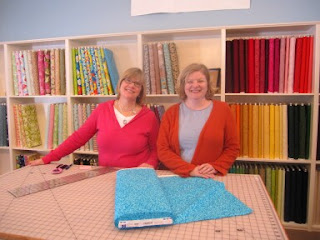 Also while outside shoveling, I spotted this icicle arrangement in the bushes which run along my foundation. I wish I good have had a little more light on the subject, but as it was I had to twist myself into a pretzel to get this shot. 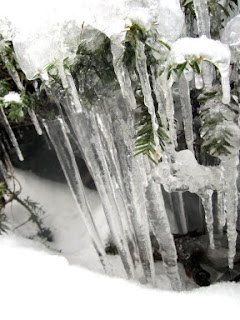 Posted by Janice Smith at 6:34 AM No comments: