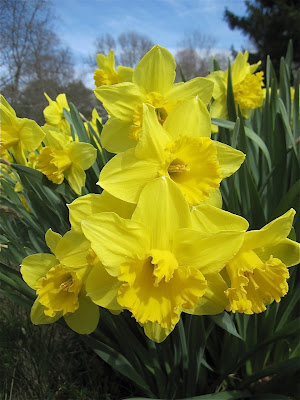 The weather has been absolutely wonderful this past week. Last Saturday,  I attended a party to celebrate the graduation of my cousin's husband who had earned his master's degree. After a week of sadness and fear, it was good to have an afternoon of happiness. 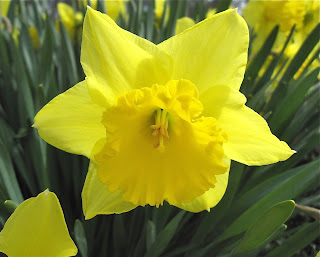 All of my daffodils are now in full glorious bloom, but these particular daffodils were photographed in my friend's front yard. Many of her daffodils had originally come from my garden. They are spectacular! Back in April of 2012, I wrote about how I had first acquired the bulbs many, many years ago. How the gift of the bulbs one day went Full Circle is really quite a story. If you have a moment, click on Full Circle to read the post for April 22, 2011. I guarantee you will enjoy it. 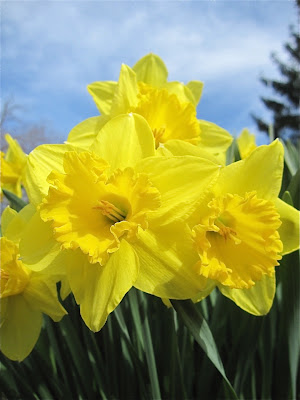 Posted by Janice Smith at 4:56 PM No comments:

Email ThisBlogThis!Share to TwitterShare to FacebookShare to Pinterest
Labels: Daffodils 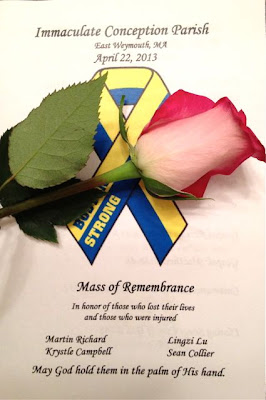 One week ago today terrorists attacked the Boston Marathon. It has been impossible to tear oneself away from the non-stop coverage. Friday was a day of sheer terror. Never before have cities anywhere been put on complete lock down while police searched for suspects. Finally, the hunt came to an end late Friday evening.
Though the present danger has past, the suffering of the victims continues, and precious young lives have been lost. This evening my church had a special Mass of Remembrance in honor of those who lost their lives and those who were injured. It was a beautiful service with incredibly uplifting words and music. I was particularly struck by a verse from "How Can I Keep from Singing. . ."

No storm can shake my inmost calm
while to that rock I'm clinging.
Since love is lord of heaven and earth
how can I keep from singing?
Love and goodness will always defeat evil and hatred.

Posted by Janice Smith at 6:33 PM No comments:

Terror at the Boston Marathon

Yesterday afternoon I sat down to blog about this past weekend. Seventy-two members of the Herring Run Quilt Guild had gone to the Sea Crest Beach Resort in Falmouth on Cape Cod for a  quilting getaway. Though it was wet, cold, and windy the weather didn't spoil the fun at all. It was amazing to view all the wonderful work of these talented ladies. The time simply flew by. I was able to complete the corner pieces of a Block of the Month quilt which if I had kept up with it, should have been completed many, many months ago. Before blogging, I decided to turn on the TV to watch the coverage of the Marathon when I heard the impossible news of the bombings which took place near the finish line.
For those not from this area, the Boston Marathon is an incredibly special event which takes place on Patriots Day each year. Runners come from all over the world to participate in this historic race, and cheering crowds line the twenty-six miles from Hopkinton to Boston. The weather had dawned bright and beautiful for this annual rite of spring.  A day later, it still seems completely unfathomable that this terrorist attack could have taken place. The photos and stories are beyond heartbreaking. Two young women and one precious eight year old boy lost their lives while another 170 people, some with life threatening and life changing injuries, were brought to area hospitals. It is truly fortunate that Boston is blessed with so many world class hospitals.
The courage and compassion of the first responders, medical personnel, race volunteers, and ordinary spectators who ran toward the bombing site was something to behold. While many were running for their lives, these courageous men and women were absolutely heroic in their efforts to aid the wounded since no one knew if or when any more bombs would go off.
While law enforcement personnel and agencies continue to search for the person or group responsible for these dastardly actions, we can only pray for the victims and try to remain strong in the face of such unspeakable horror.

Posted by Janice Smith at 8:59 PM No comments: 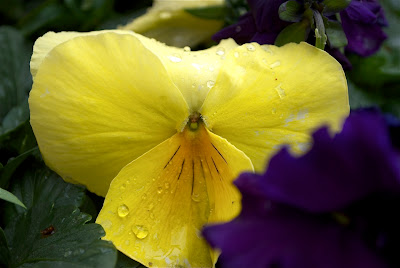 Is there anything more cheerful on a gloomy day than a smiling pansy face? It rained last night, so I grabbed my camera with its 18 - 55mm lens and a 3T close-up filter to try to capture the droplets. The slight wind made it difficult to get crisp images. 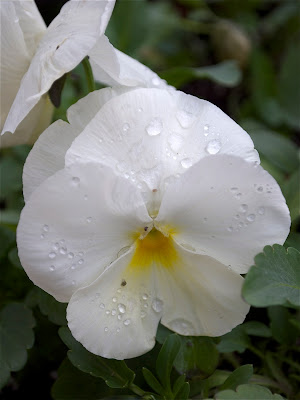 This year the garden center also had some pansies with ruffled petals. Who could possibly resist them? 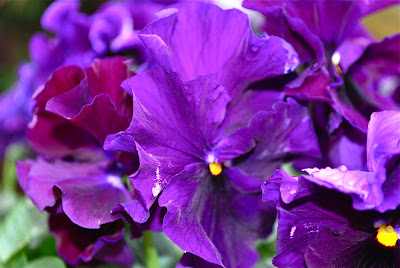 
Spring is here! Yesterday, the temperature was in the sixties, and today it hit seventy. This morning we were out for a long walk and passed the home of some friends who also love schnauzers. Jack, the light schnauzer on the right, was in the front yard with Mr. S., so we stopped to greet them. After a few initial growls and barks, Emma and Jack calmed down, so we went into the back to also greet Henry. Jack and Henry and Emma got along just fine, and Emma had fun exploring their yard.
Here they are with Mr. S.. The dogs look happy because Mr. S. was giving out treats. 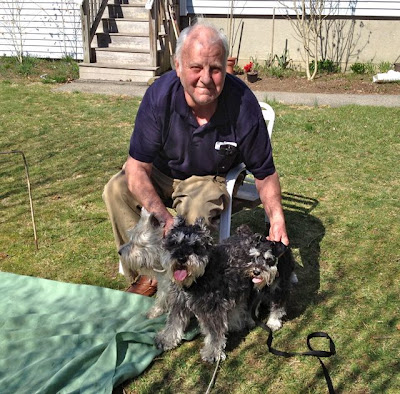 Henry and Jack are, I believe, eight and ten. They are bigger than Emma and haven't as yet had their spring haircuts. Emma looks quite petite next to them, but she clearly held her own; she's fearless.
This evening I went with a friend for a walk at Webb Park in North Weymouth where I took this quick shot with my iPhone. Picnic, anyone??? 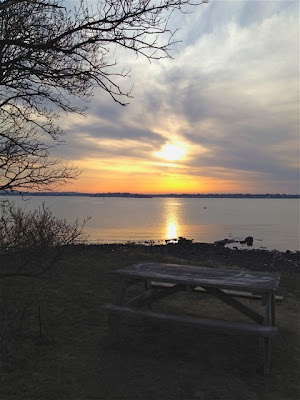 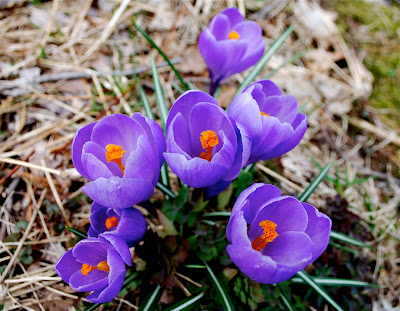 When I came back from the gym a little while ago, I noticed that this small clump of croci were open. I love their shade of purple, so I ran for my camera and had some fun photographing them. The sky was overcast like a giant soft box giving a soft even light.
My favorite photo below was taken with a regular 18-55mm with a 3T close-up filter. 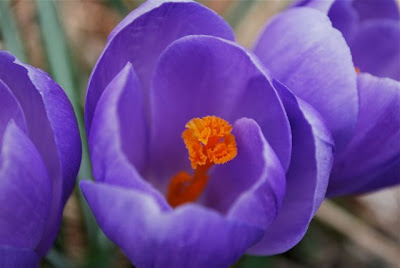 This is just the type of soft floral photo that I like to take. Oh, one more thing, this was taken just inches away from where I took the snake photo that I posted yesterday. Fortunately, it's too cold today for them to be slithering about.
If you enjoy photography and live in the area, please stop by the John Curtis Library on Route 139 in Hanover, MA,  during the month of April to see an exhibit of images by members of the South Shore Camera Club. There is an opening reception Saturday, April 6th, tomorrow from 2:00 to 4:00 and all are welcome. I will be there as I have two photos in this exhibit.
Posted by Janice Smith at 10:04 AM 1 comment:

Email ThisBlogThis!Share to TwitterShare to FacebookShare to Pinterest
Labels: Crocuses 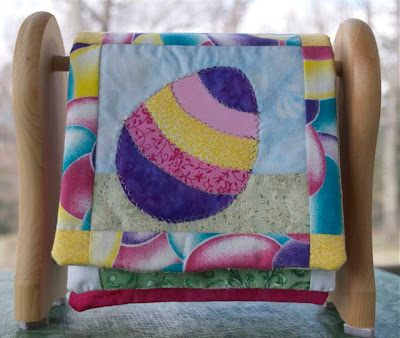 I've been busy and haven't had a chance to post. Last Friday and Saturday, I spent time with friends quilting. For Easter, I was invited to the home of my cousin's mother-in-law. It was a lovely day.  Since there was no school on Easter Monday, two of my favorite little girls and their mom, my godchild, came to visit. It's always great fun being with them, and it's a joy to see them playing with Emma. We played soccer in the yard, went to lunch, and then spent time at the park.
Tonight I attended a program with friends at the National Archives in Waltham. The speakers were Kevin Cullen and Shelley Murphy, the authors of Whitey Bulger - America's Most Wanted Gangster and the Manhunt That Brought Him to Justice. Both are writers for The Boston Globe and have been covering this criminal figure for years. Based on tonight's program, this book should prove to be a fascinating read.
Why did I title this post Yikes??? Well, let me show you. . . 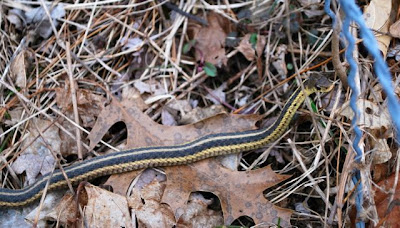 .
Yes, I've got snakes. The other day there were three of these slithery guys basking in the sun in my yard. Who could blame them for seeking some warmth after the winter we've had, but I would just as soon they find a place somewhere else. I'm basically a live and let live kind of person, but Emma doesn't share this philosophy. Last week she caught one and I had to take it away from her. I grabbed the end of it and then relocated it to the woods behind my yard. Yes, I've become a snake wrangler and trust me, I don't like it one bit. I know snakes are beneficial in the garden, so I would never kill one. If they just stayed in the fenced in part of the garden where Emma couldn't get at them, we could probably all co-exist. Unfortunately, they don't, and so I'm forced to move them. Yikes!!!
Posted by Janice Smith at 8:21 PM No comments: