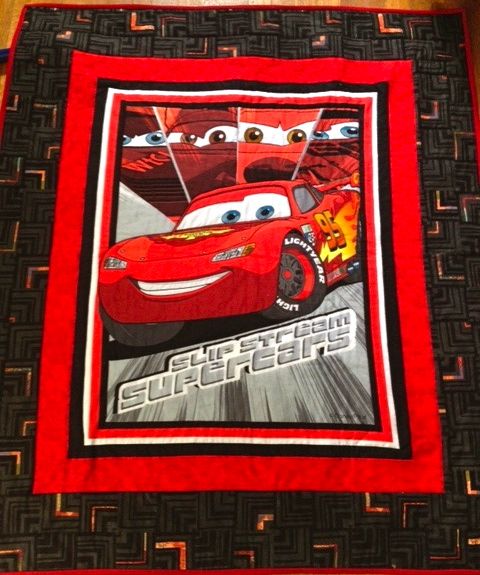 Yesterday afternoon I attended the fourth birthday party of one of my little cousins. The theme was legos/race cars which are two of his favorite things. This is the Lightning McQueen quilt that I made for him using a purchased inner panel and then adding the wide orange and the outer dark print borders. The reverse side of the quilt features colorful construction vehicles against a deep blue background. 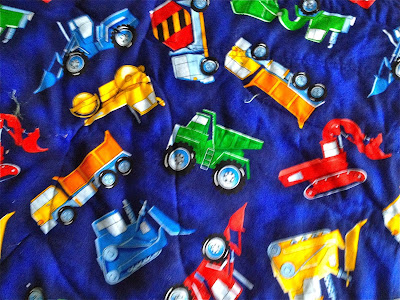 The birthday boy received lots of cars and trucks, and his little brother who at fifteen months has mastered the art of walking also investigated each unwrapped treasure. Freddie is an enthusiastic and super-polite gift-receiver! As he opened each wondrous gift, he would joyfully announce, "It's just what I wanted. Thank you!" or "Hey guys, look at this. I love it!"  He also received sports-related clothing, books, sport items, etc. What more could a little boy want?
This was a quilting weekend for me, and I finally made some real progress on the last set of blocks for a BOM  upon which I have been working on and off for the past two years. I'm almost to the point where I can begin assembling all the many, various segments, and I'm absolutely determined to stick with it until the top is completed. I know I have said this before, but this time I really, really mean it!!!

Posted by Janice Smith at 8:01 PM No comments:

In My Garden This Week 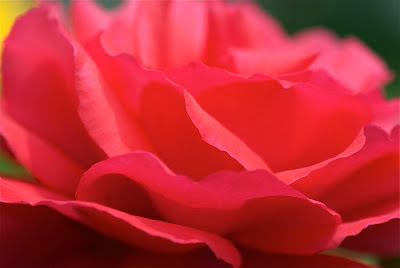 Slowly but surely, foot by foot, things are taking shape in my garden as I have been trying to work diligently in it for an hour or two each morning. I even went to early Mass this morning so I could get a few things planted before the heat of the day. 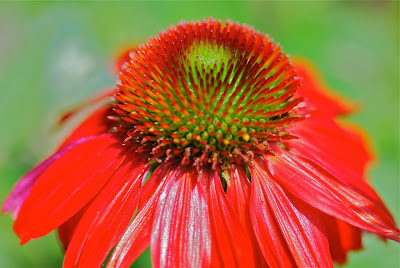 I have different shades of coneflowers, but on Friday I spotted this brilliant red one above at A. Thomas & Sons Nursery in Milton and, of course, it had to come home with me. 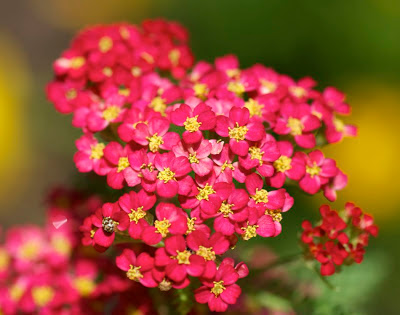 Continuing the red theme, this yarrow is also new this year. Why all the red? I'm trying to lure hummingbirds to my garden. I've hung a feeder and have my fingers crossed. I know they are around, so they may be visiting jut not when I'm looking.
This colorful spinner also caught my eye and it, too, came home with me. 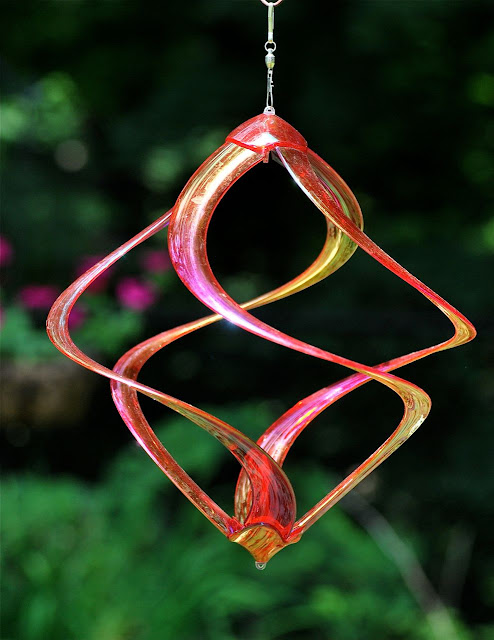 Finally, here's a pink mandevilla vine which looks cool in this ceramic pot on my porch. 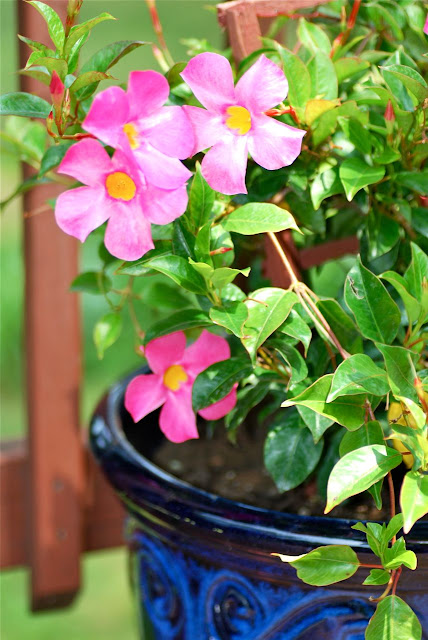 Keep cool and happy gardening!
Posted by Janice Smith at 10:15 AM 2 comments: 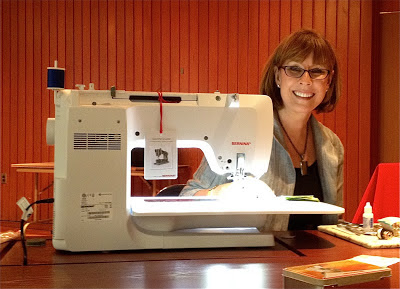 Alex Anderson came to Canton, MA, today. The program was sponsored by a local quilt shop,  Ann's Fabrics. Alex talked about how she became a quilter and how her career in the quilting world has developed. She brought with her some of her quilts and demonstrated a few neat quilting tricks. She was lovely and funny.  I truly enjoy the online program, The Quilt Show, that she does with Ricky Tims. It's a great resource for quilters.
Since yesterday was the first day of summer, a friend and I celebrated by going to Tony's Clam Shop across from Wollaston Beach for the first lobster roll of the season. It was every bit as yummy as it looks. :-) 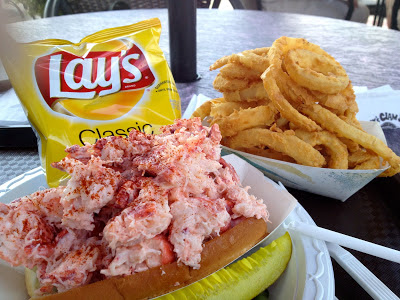 Posted by Janice Smith at 6:22 PM No comments: 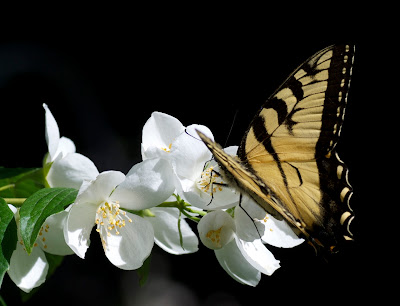 I have been attempting each day to shot a few photos using my new macro lens. Yesterday morning before going to the Cohasset Arts Festival, I found this willing subject sipping nectar on my mock orange bush.
The colors on the underside of the butterfly are a bit more muted. 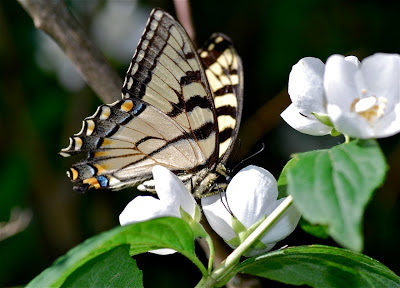 This butterfly was missing a section of its wing, but it didn't appear to hamper its flight at all. 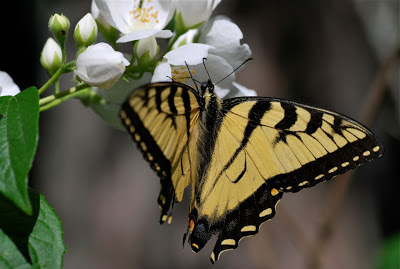 Lastly, here's a poppy from my friend Donna's garden. I only had my compact camera with me, but it did a good job capturing it. 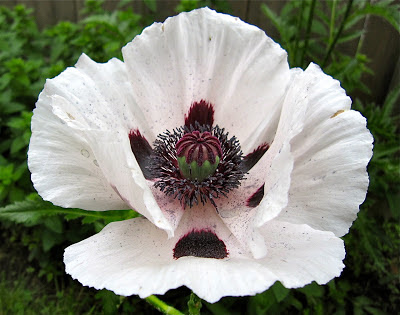 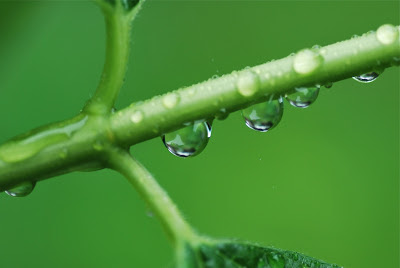 Normally, I'm not happy when we have a stretch of rainy weather, but it has provided me with some lovely photographic opportunities.  These raindrops were on a long drooping limb of a mock orange bush that I had meant to cut back. I'm glad that I didn't get around to doing so. Below, here is a photo of the mock orange blossoms. 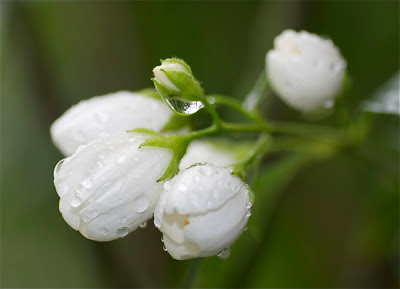 A clump of spiderwort is blooming in the front corner of my garden. 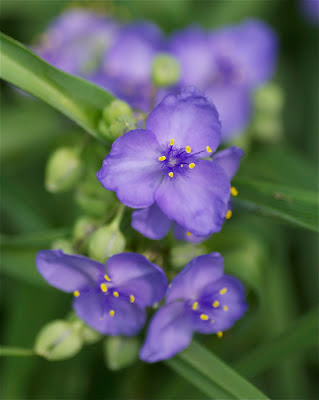 In the large planters on my porch, this year I have planted pink dahlias and pink verbena. 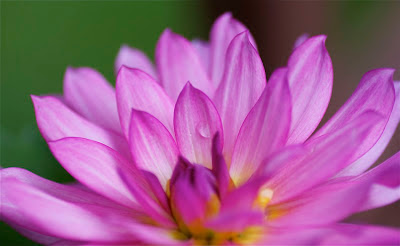 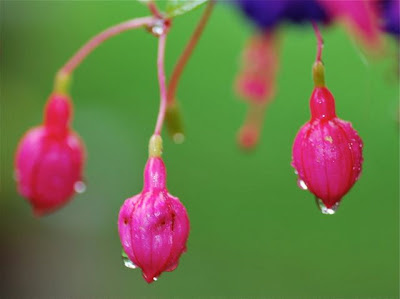 It's funny how you associate certain plants with certain people. I think of my Aunt Mildred when I see a fuchsia as every spring she would have one hanging in the breezeway. We've had some mixed weather this week; Wednesday and Thursday were glorious, but we also had our share of rain. These photos were taken earlier in the week. 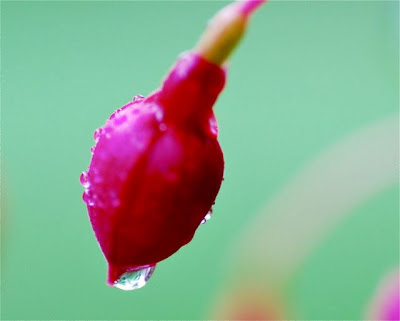 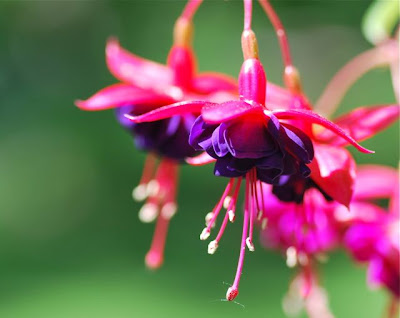 On Wednesday, Emma and I had a visit from my cousin and her little girls. They love Emma, and she loves them. After playtime with Emma, it was off to lunch and then a stop at the park. It's always so much fun when they come to visit, and I always get new artwork for my refrigerator.
Yesterday, I went with friends to NH to drop off some quilts to be machine quilted. After lunch, we stopped at a favorite quilt shop, Quilted Threads, in Henneker, NH. Then we began the l-o-n-g- drive home in the pouring rain. Things went fairly smoothly until we approached Boston and then the traffic began to crawl. I thought we'd never get across the Zakim Bridge and through the tunnel as we inched along bumper to bumper. The miserable ride was forgotten, however, when we reached Liz's house and learned the joyous news that her daughter Courtney had received an acceptance notice from the medical school from which she had been hoping to hear. Getting into medical school is extremely difficult, and we are all thrilled for this bright, wonderful young lady.

Posted by Janice Smith at 11:10 AM No comments:

Email ThisBlogThis!Share to TwitterShare to FacebookShare to Pinterest
Labels: Fuchsia

We're Having a Heat Wave 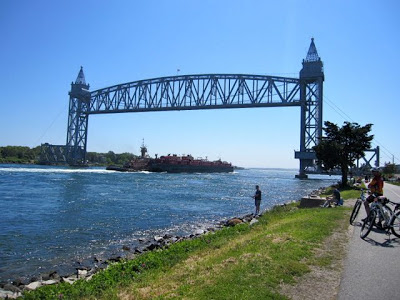 Yesterday was our second day of temperatures in the nineties but for those who were walking or biking along the Cape Cod Canal, there were lovely cool breezes. A group from the Moving Toward Wellness program from Fitness Unlimited in Milton had headed to the Cape for the afternoon. One of our members had graciously invited us to her summer home for a get-together. All of these wonderful ladies have something in common, besides being beautiful, fun, friendly, dynamic, and delightful to be with, all are cancer survivors. We meet weekly to take part in a special exercise program at the gym. 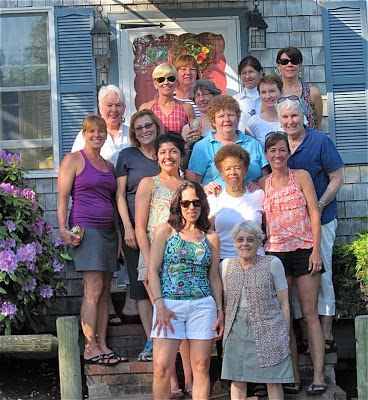 Today was another scorcher. I attended a special Mass at noon to bid farewell to our pastor, Father William Salmon,  who is retiring. He has been a priest for forty-eight years and will now become a senior priest in residence in a parish not far from here. He has been an excellent pastor, and it was wonderful to see such a large crowd there to thank him and wish him well.
Next it was off to Stoughton to spend a few hours with some quilting friends. Life is good!
Posted by Janice Smith at 3:56 PM 1 comment: