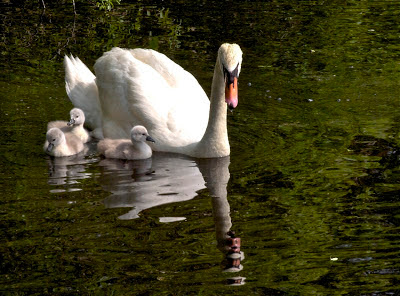 The opportunity to photograph the swan family in Abington last week was truly something special. I  photograph swans each spring, but never before have swans been so accessible. Mr. and Mrs. Swan constructed their nest in a very public place, right near a main road. The fence at the edge of the pond was a mere few feet from the nest. Both times that I visited, crowds lined the fence. The swans seemed totally unperturbed by the presence of so many onlookers. The only thing that would get a rise out of Mr. Swan was when a mallard would get too close or when someone approached the fence while walking a dog. One would have thought these people would know better. The male would rise up hissing and spreading his wings intimidating the person with dog to back away quickly. 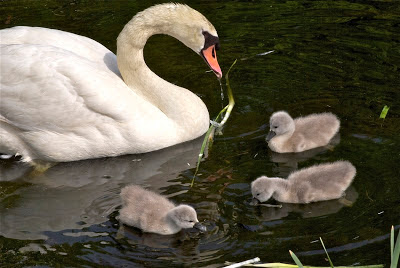 While mom was away from the nest, dad would stand guard. 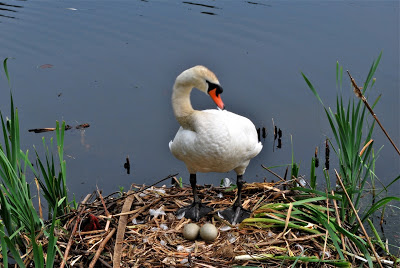 When I drove down to Abington at the end of the week, the swan family had abandoned the nest and they were on the other side of the pond. Sadly, the last two eggs never hatched.
Posted by Janice Smith at 5:53 PM 1 comment: 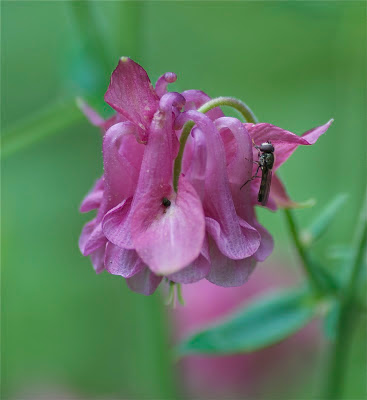 The last few days have been dreary, damp, and dismal.  When we have short breaks in the weather, I've been testing my new macro lens. 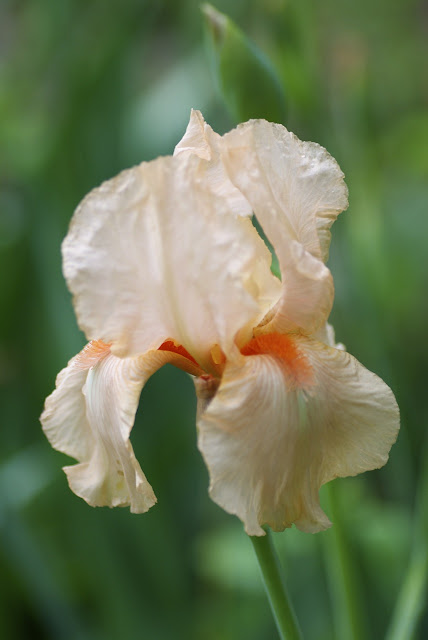 Isn't this peach iris a beauty? My brother purchased these irises for my mom many, many years ago, and they have bloomed faithfully each year. 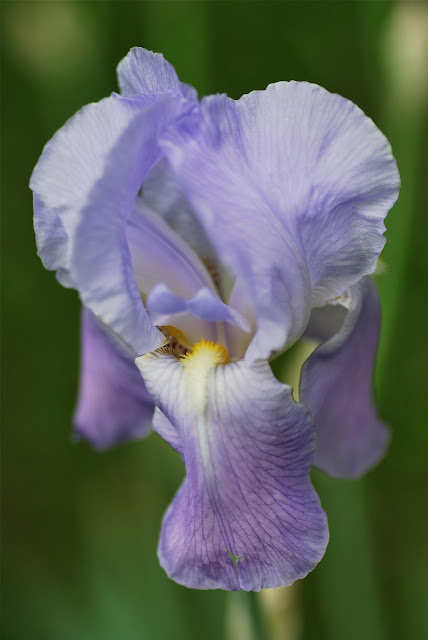 This is one of my favorites from the week. 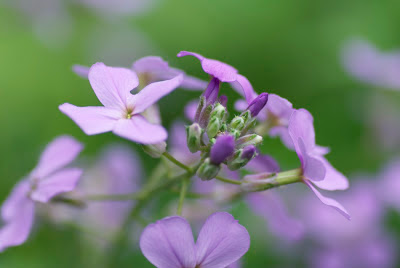 Even the humble dandelion looks better through a macro lens. :-) 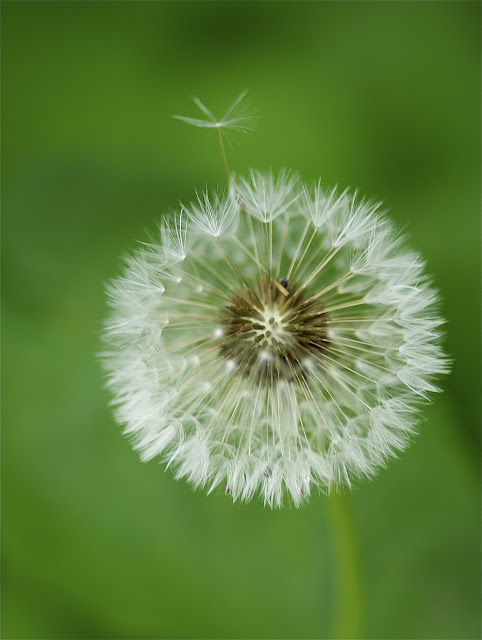 The 90mm length also makes this a good lens for portraits. Here's my favorite subject, Emma. Emma and I spent yesterday with my cousins and their children. At first, although she had been invited, I was wasn't sure whether I should bring Emma or not.  I'm glad I did as she was on her best behavior and received non-stop pats and hugs from the children. We both had a most excellent time. 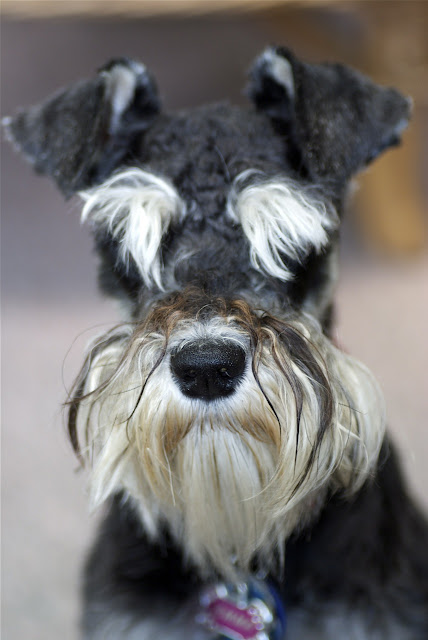 Posted by Janice Smith at 6:35 PM No comments:

A Visit to the Jenny Pond Swan Family 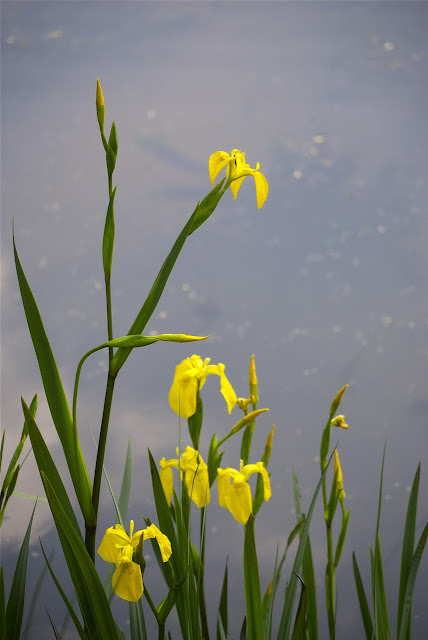 On Tuesday, I met friends for lunch in Plymouth.  I had my camera equipment with me, so I stopped by Jenny Pond to check out the swan family which lives there. The two cygnets gliding by with their parent appeared to be about a week older than the ones in Abington. There was also the small clump of yellow irises pictured above. 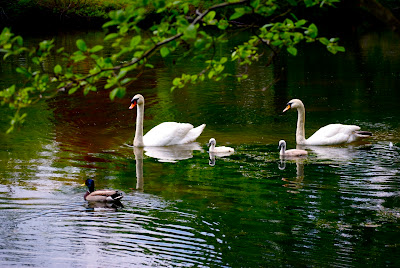 When I returned home, I popped on my new macro lens and grabbed a few more shots of the purple irises in my backyard. This time I did place my camera on a tripod to take this shot. 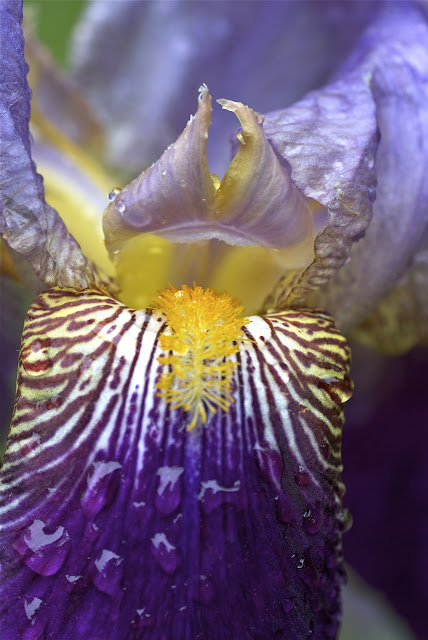 I'm going to have lots of fun with this new lens!!!

Posted by Janice Smith at 5:53 AM No comments: 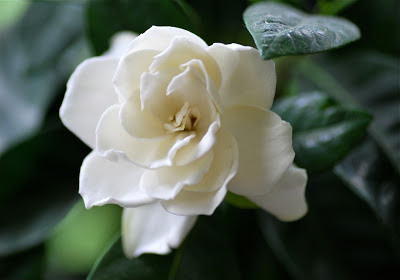 I love macro photography and for the last few years I have been using a close focusing zoom with a Nikon 3T closeup filter. On Sunday, I bought a new lens, a Tamron 90mmF2.8 lens, to further explore this field of photography. Here are two of the first photos taken with this lens. I should have used a tripod, but I just braced myself to take these. The gardenia is on my sunporch, and the iris is in my garden. This lens will no doubt be great fun; expect many macro photos in the days ahead! 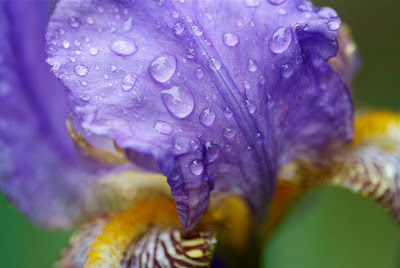 Posted by Janice Smith at 6:30 AM No comments:

Could They Be Any Cuter? 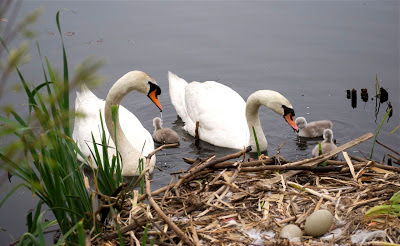 I drove down to Abington this morning to see the newest members of the swan family. It was dark and overcast, but I still managed to shoot quite a few photos. Here's Mr. Swan about to settle down on the last two unhatched eggs while Mrs. Swan shepherded the other three. 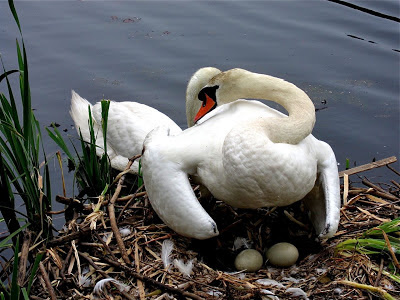 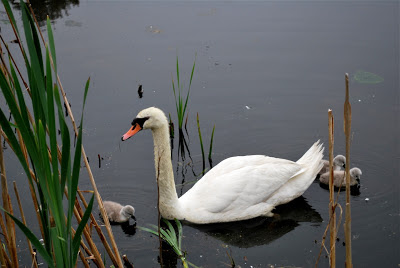 One tried to hitch a ride with mom, but he wasn't quite able to climb aboard. 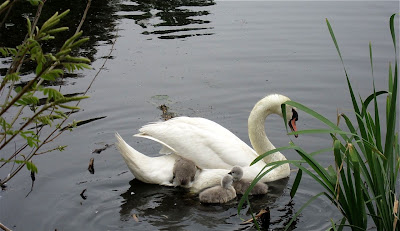 The photo below is my favorite. 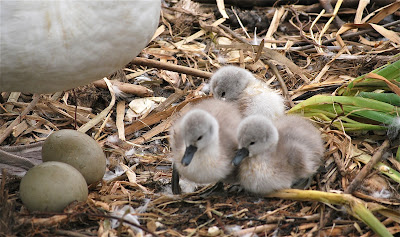 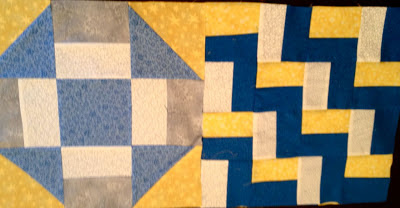 The Boston Modern Quilt Guild is asking quilters to make 12.5" blocks using the colors: blue, yellow, white, and grey. Quilters may incorporate two, three, or all four colors in their squares. These quilt blocks will be then be made into quilts for the victims of the Boston Marathon terrorist attack. Many area quilt shops are collecting these quilt blocks including our wonderful, local quilt shop, Heart and Hands, in South Weymouth, MA. They are due by May22nd. 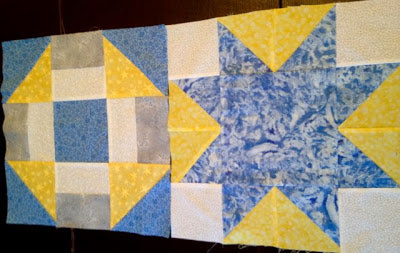 I've made six blocks for this special cause. My favorite was the last block I made. I didn't follow a pattern, but rather, pieced together leftover odds and ends. It's not something I have ever tried before, but its contemporary look is pleasing to my eye. 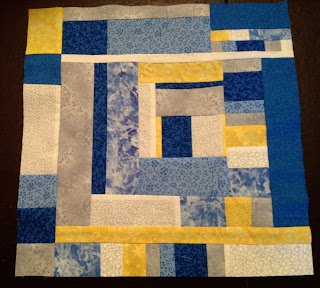 Speaking of quilting, check out "First Quilter in Space". When astronaut Karen Nyberg is launched on May 28 to the International Space Station, she will be taking a few small quilting essentials with her. It's a fun article to read, especially her plans for the scraps she will use from the space station's "rag bag." 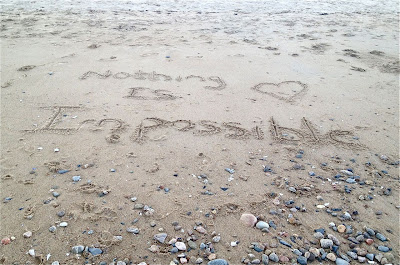 Yesterday morning I attended a memorial Mass for my Cousin Jane with her children, grandchildren, friends, and extended family. After Mass, we went to the home of one of her daughters where the seven little ones spent the day playing. In the late afternoon, my seven youngest cousins, their moms, and I walked to the little beach at the end of the street for more fun jumping in the sand, collecting beach glass, and wading in the water.
We also spotted this message. There was no one sitting nearby. Who wrote it? Why is there a heart? What prompted the message?  H'mmm . . . I don't know why but I like the idea of messages written in the sand. It reminds me of a tiny poem by Daniel Smythe.

Driftwood marks the shore. The alphabet
of ancients writing a last word.

This prompted me to wonder about this poet. A Google search led me to an article from the Schenectady Gazette, July 27, 1966. According to the piece, Professor Daniel Smythe, an English professor from Bradley University in Peoria, Illinois, was having his fifth book of poetry published. He had long been a friend of Robert Frost, and Louis Untermeyer, famed critic, wrote of Smythe's poetry. "What is noticeable about the lines is the deceptive simplicity! - the surface is smooth but there are many layers of consciousness in the depth." That is truly high praise for any poet. Through the wonders of the internet, I was then able to locate and purchase a copy of The Best of Daniel Smythe from a used book seller in New Hampshire. I look forward to reading more of his work.
Posted by Janice Smith at 7:49 AM No comments: 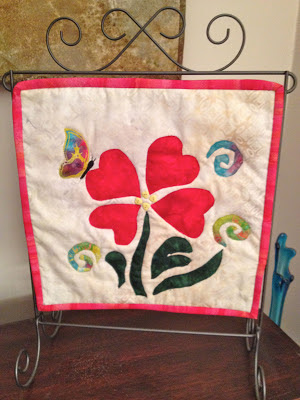 In February, Ricky Tims posted a free pattern, "Heart Blossoms," on The Quilt Show website. He encouraged everyone to have fun with it and to make any changes that we wished. Well, it took me a while to get around to making it, but I finally did and I'm happy with how it turned out. A piece of the batik fabric which I was using looked a bit like a butterfly, so I fussy cut a section for the wings, added a body, and placed it on one of the blossoms. Also, I placed four, little, yellow heart buttons in the center.  If you click on the photo, you will be able to see a larger version of this piece.
Speaking of The Quilt Show, please keep Libby Lehman in your thoughts and prayers. She is a frequent contributor to the program and one of the funniest women in the world of quilting; a nicer, more genuine person you could never meet. I have heard her speak on a number of occasions and each time was a delight. She is being treated in a Houston hospital after having an aneurysm and suffering a stroke. Miracles do happen and everyone in the quilting world will be praying that she makes a full recovery. 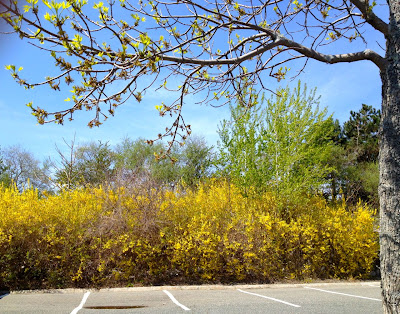 Finally, after doing my grocery shopping the other day, I began pulling out of my parking spot when I noticed this spring scene. I stopped and took a quick shot with my iPhone. The spring yellows and greens were so vivid. Naturally, I could have cropped the parking lot spaces out, but I wanted to remind myself and others that there is beauty everywhere if we just keep our eyes open.
Cropped photo version . . . 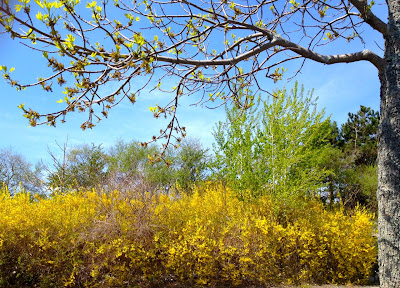 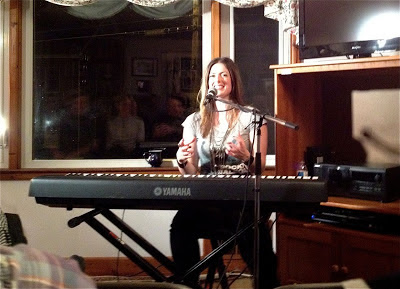 My friends Maribeth and Frank are huge music fans and recently went on a music cruise from Florida to the Caribbean. One of the acts performing on the cruise was Callahan, a British singer/songwriter who is currently living in Atlanta. On the cruise, she mentioned plans for her  "Callahan Across America" tour. Her intention is to do a concert in homes all across the country. My friends signed up to host her, and last night was her very first stop on the tour. It was, as the British might say, "Brilliant"!!! Everyone had a wonderful time! 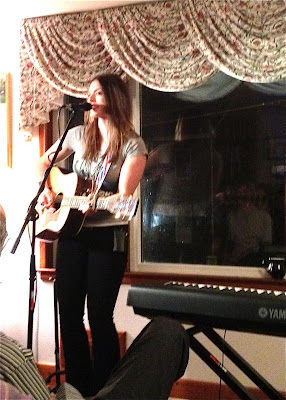 She is a gifted songwriter with a lovely voice. I was truly struck by some of her hauntingly beautiful lyrics. To learn more about her, her tour, or her music, visit her website, Callahan. 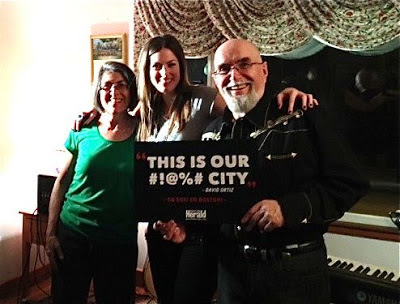 Here are Maribeth and Frank with Callahan. Frank is holding a sign with David Ortiz's infamous quote. For those not from this area, David Ortiz is a beloved Red Sox player who uttered these words when speaking to the crowd at Fenway Park before the first game held after the Boston Marathon terrorist attack. No one minded his earthy language as it echoed what the proud, defiant people of this Commonwealth feel; we are strong, Boston Strong!