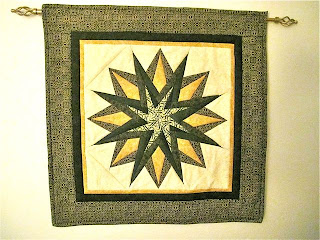 I have quilted wallhangings for every season and every reason, but oddly enough given my heritage, I have only one small piece for St. Patrick's Day. I decided, therefore,  to use a celtic theme for a group challenge in which I am taking part. Here is my recently completed piece. 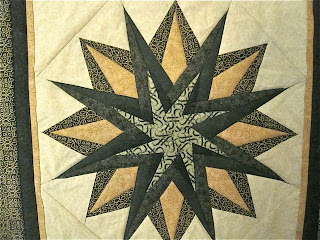 Try as I might, I just could not remove the yellow cast in the first photo. The background should be cream, and then there are various shades of green in the design.
Posted by Janice Smith at 6:59 PM 1 comment:

On Saturday I met my precious, one day old cousin. What a sweet, sweet bundle of joy he is.
Yesterday I spent most of the afternoon watching the pre-shows for the Academy Awards. I love the whole spectacle from beginning to end, and it was fun having Billy Crystal once again as ringmaster. The fashions this year were simply beautiful and the actual telecast seemed to move right along. Some years it seems to drag on and on, but not this year. The Cirque de Soleil performance was magical.
The Artist, my favorite film this year, won the Oscar for Best Picture, and it was well deserved. Though George Clooney is my dream guy, I'm glad that Jean DuJardin won for Best Actor as he was simply wonderful in The Artist. I have yet to see War Horse, and after seeing Hugo receive so many awards I'd like to see them both on the big screen.

Joy in Our Family

Early this morning I was startled awake by a phone call from my cousin telling me that at 3:07 in the morning she had given birth to an eight pound ten ounce baby boy.  What happy, joyous, wonderful news!!! My favorite two year old is now a big brother.
Posted by Janice Smith at 8:01 PM 1 comment:

The Academy Awards will be held Sunday night, and I will be eager to see who takes home the coveted Oscars. I have at this point seen five of the nine films nominated for best picture: The Artist, The Descendants, Midnight in Paris, The Help, and  Money Ball. Of these, I would give the nod to The Artist, which is an absolute delight.
Last Saturday night I went with friends to see The Iron Lady which deals with the life and career of Margaret Thatcher, the longest serving British Prime Minister of the 20th century and the only woman to have ever held the position. As always, Meryl Streep gave an amazing performance and clearly deserves her Oscar nomination for best actress, but having said that, I found the film sad and oddly disturbing. Margaret Thatcher's policies and politics engendered such strong feelings, both positive and negative, and yet this film seems to focus far more on Margaret Thatcher in her later years and with the decline of her mental faculties. Since she is still alive, it seems unfair and insensitive at best that The Iron Lady focuses so much on this aspect of her life. For that reason, I wouldn't recommend this film. It would have been stronger had it dealt more with her controversial politics, policies and actions as Prime Minister.
One more thing, I can't wait to see what Billy Crystal does as host of the Oscars. No one does it better. He'll probably have a field day with The Artist.
Posted by Janice Smith at 9:50 AM No comments:

Email ThisBlogThis!Share to TwitterShare to FacebookShare to Pinterest
Labels: The Iron Lady; The Oscars 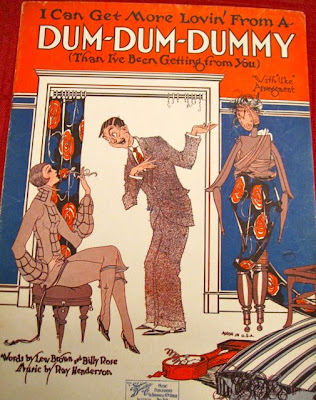 Happy Valentine's Day!!! To celebrate the day, I thought I would share with you some classic romantic pieces from my sheet music collection. 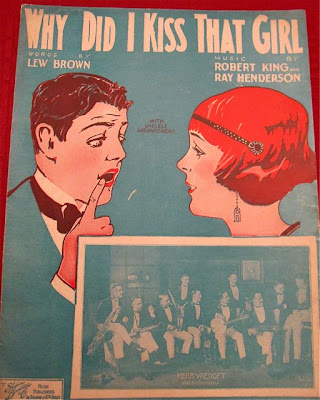 My father's oldest sister was quite a pianist. As a child, I remember going through her music cabinet and pulling out all sorts of interesting pieces which she would then play. Aunt Mildred had taught fifth grade in the Boston Public School system for many, many years. I know she was a fine teacher, but you could surely sense that she would brook no nonsense in her classroom. She was always a prim and proper lady, but you could glimpse another side of her when she sat down to play. She could play a hauntingly beautiful Blue Danube Strauss waltz then go straight into a key-thumping 12th Street Rag. Her upright piano stands in my living room and her collection of sheet music is stored in a music cabinet in the basement. Though the piano is over one hundred years old, it has a great, rich sound. I do sit down at the bench from time to time, but alas, my skills are rudimentary at best. 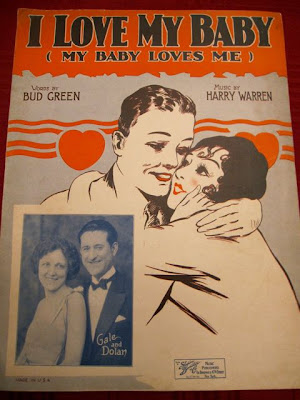 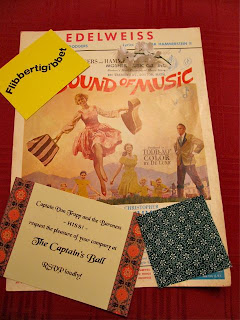 Last night The Company Theatre in Norwell offered the Sing - a - Long Sound of Music. It was great fun! My friend Marilyn and I weren't quite sure of what to expect, but we enjoyed every minute of it. The ads had encouraged audience members to come in costumes related to the movie, and about thirty people did so. My favorites included a woman in a nun's habit carrying a carburretor, a woman and two young girls wearing outfits made from curtains (complete with curtain rods), a goat herder, folks wrapped up as brown paper packages, and of course, girls in white dresses with blue sating sashes. The best costumes were worn by a woman carrying a guitar case and dressed exactly like Julie Andrews as she arrived at the Von Trapp residence and a young woman dressed as a marionette with braids and strings attached to her limbs. Lots of creativity went into all of these costumes.
Everyone sang enthusiastically as the lyrics appeared on the screen. The audience cheered for Maria, hissed at the Baroness, and booed the Nazis.  The entire audience appeared to be having a rollicking good time with the possible exception of one disgruntled husband who upon leaving the theater remarked, "All things considered, I would just have soon have spent the time having a root canal without novacaine." Boo! Hiss! Everyone else loved it! If you ever get the chance to attend a Sing - a -Long Sound of Music, throw away your inhibitions and go have a great time!!!

Email ThisBlogThis!Share to TwitterShare to FacebookShare to Pinterest
Labels: Sound of Music Sing-a-long

One Bright Idea after Another

On this date in 1847, Thomas Edison was born in Milan, Ohio. I remember reading a biography of Edison in which it recounted how a teacher had once deemed him "addled" and told his parents that he would not be able to learn at which point his mother removed him from school. She taught him to read and allowed him to pursue his own interests in mechanical objects. I have often thought that this was perhaps the single worst assessment ever made by a teacher in the history of education.
Known as the Wizard of Menlo Park,  Edison took out 1093 patents during the course of his career. His lab at Menlo Park employed workers around the clock to assist Edison in making his ideas for countless inventions into reality. Among his greatest inventions were the first incandescent lightbulb, the phonograph, and the motion picture camera.
Here are links to two one minute  YouTube videos which you might enjoy. The first Edison Talking about His Invention of the Light Bulb and the second Thomas Edison 1847- 1931.
Posted by Janice Smith at 11:10 AM No comments: 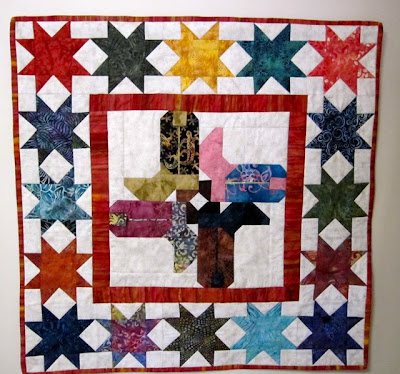 At the Houston Quilt festival, I purchased the pattern  "Boots All Around" by June Jaeger, and I finally completed it yesterday. I intend to hang this piece in my sewing room and may display some quilt pins I have collected on it.
Posted by Janice Smith at 4:27 PM 1 comment: 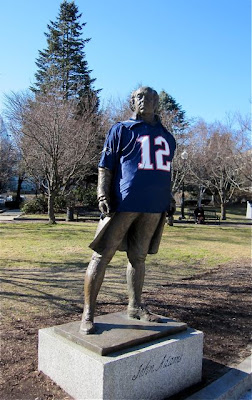 This statue of John Adams, our second President, decked out in his Patriot t-shirt stands in front of Quincy's City Hall. Of course, it's only naturally to see him supporting our team since he, himself, was one of the original Patriots back in 1773. :-) 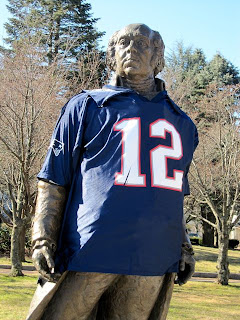 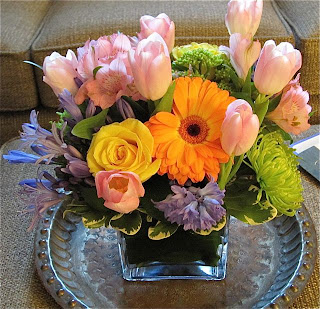 Yesterday afternoon the doorbell rang and to my surprise, the florist was delivering these beautiful flowers. Aren't they gorgeous! They were from my friends at the gym. I attend an exercise class for cancer survivors at Fitness Unlimited in Milton, MA. The class is sponsored by the Caner Community Renewal Project. We have lots of laughs as we exercise our way to better health. It's a delight to spend time with these friendly, caring, strong women each week. 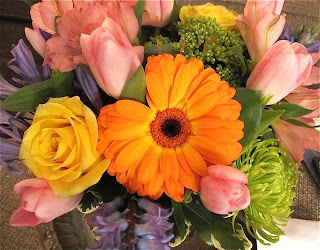 Everyone has been so very supportive as I deal with my sweet Katie's passing. I truly appreciate it.
Posted by Janice Smith at 11:31 AM 1 comment: