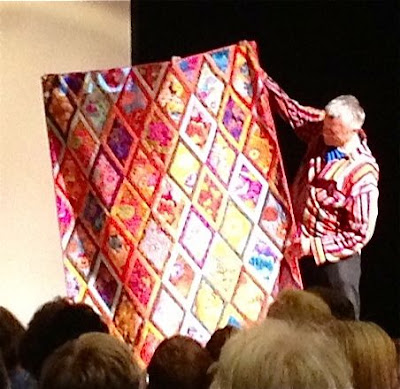 On Friday evening I attended a lecture by Kaffe Fassett at Bentley College in Waltham. If you don't know the name, he is an internationally known fabric designer. I enjoyed hearing about his design process and seeing a slide show of his work. Though I, myself, have never worked with his fabric, it was clear that the majority of people in the audience were huge fans. He is also well known in the world of knitting and needlepoint. As we were exiting the lecture, there was a long line of people waiting to get their books signed. All together, it was an interesting evening.
This was also a quilting weekend with friends. I spent my time working on blocks for a "one block wonder" quilt. Here's a sneak peek as I was playing around with a few of the hexagons. 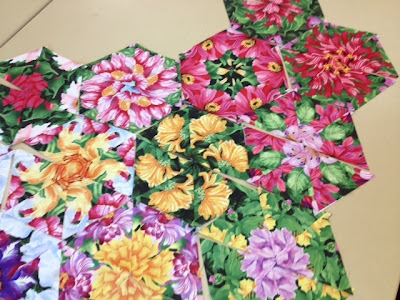 Posted by Janice Smith at 6:38 PM No comments: 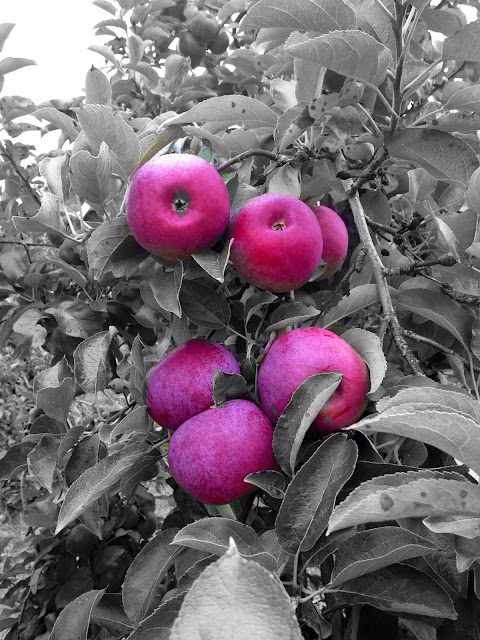 On Wednesday, I went apple picking with my soon to be four years old cousin and her mom. It was great fun, and they introduced me to the culinary delight of warm cider doughnuts. H'mmm . . . Yum!!! Preschoolers and their families went to the Honey Pot Hills Orchard in Stowe, MA.
The photo above was altered using an app called ColorSplash on my iPad. I thought the apples would make a fine subject. When you upload one of your photos, it comes in as a grayscale. You then use your finger tip as a brush to add back color where you want it. That's a simplified explanation, but honestly that's really about all there is to it. The video tutorial with the app is clear and well done. 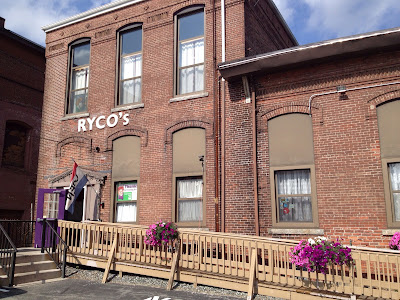 This morning I went with my friend Laurel down to Ryco's in Lincoln, Rhode Island. I wanted to purchase a few more yards of a fabric which I had previously bought and which I now hope to use in a one-block wonder quilt. Besides having fabric, Ryco's carries a large selection of ribbon, trims, and braids. 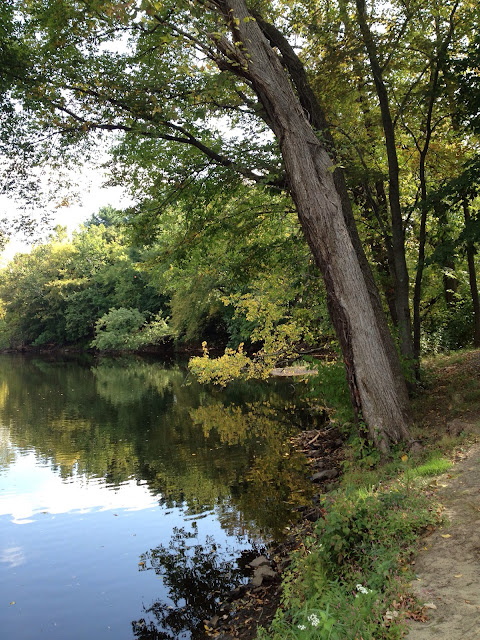 Ryco's is located in an old mill on the banks of the Blackstone River, and it is there that I shot this photo. The leaves in some spots are beginning to turn bright yellow. There are many old mills and buildings in the area. I've often thought that this one would make a perfect setting for a thirties-style gangster movie. 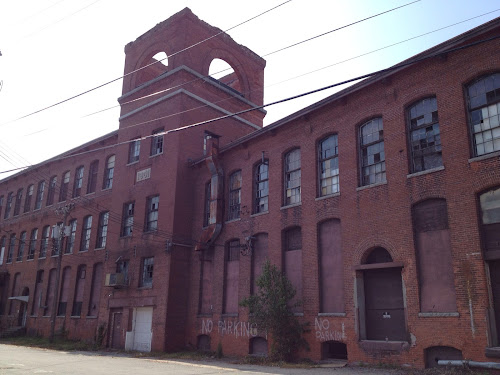 Posted with Blogsy
Posted by Janice Smith at 9:36 PM No comments: 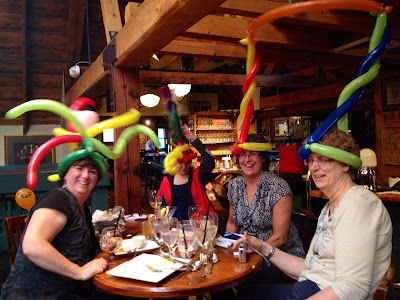 Yesterday after the Herring Run Quilt Show ended, we went for a bite to eat. Wow! Were we ever lucky as the balloon man was entertaining!!! Don't my friends look festive in their special hats.
Both Edith, far right, and Maribeth won ribbons at the show. Edith received hers for "Precision Piecing" of her "Joy" quilt. I am still working on the same quilt, but it is in timeout until after the holidays. 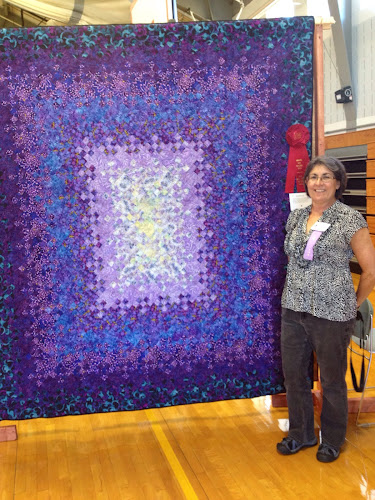 Here's Maribeth with her "Blooming Nine Patch." It's simply purple-icious!!! Believe it or not, Maribeth made three quilts using this pattern in the space of just a few months.

This is my first time blogging from my iPad, and I haven't quite got the hang of it yet. I'm trying out the app Blogsy in hopes of being able to post while I am on an upcoming trip.

Posted with Blogsy
Posted by Janice Smith at 8:56 PM No comments: 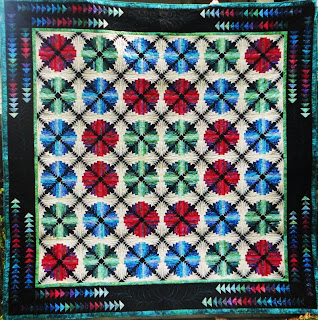 If you enjoy beautiful quilts, the place to be this weekend is the Herring Run Quilt Show being held at  Norwell Middle School, Route 123, 328 Main Street, Norwell, MA 02061. The show will be Saturday, Sept 22, 10:00am to 5:00pm and Sunday, Sept.23, 10:00am to 3:00. Over 175 quilts will be on display. There will be venders, a boutiques featuring item made by members, a silent auction with all proceeds going to breast cancer research, and more. Admission is $7.00.
You will also be able to take chances on this magnificent quilt made by members. Be sure to click on the photo to see an enlarged version of this paper pieced beauty. There are close to 7,000 pieces, and no photo can capture how truly stunning it is.
Posted by Janice Smith at 7:55 PM 1 comment: 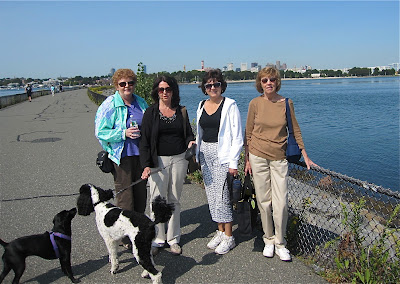 This morning a few members of the Dancing Queens went walking at Castle Island. The weather was absolutely perfect. Don't let Emma know, but Raeley also accompanied us on our walk. Here a better picture of Raeley, a beautiful standard poodle, with her mom. It would have been too long a walk for Emma. 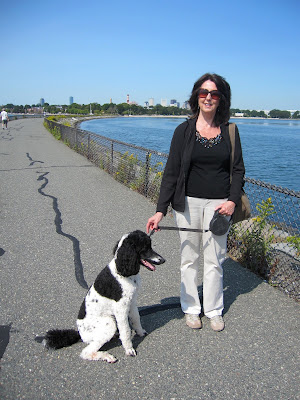 We all agreed that since retirement we have come to truly love September. When we used to be starting the school year, we were always far too stressed and busy to truly appreciate it. 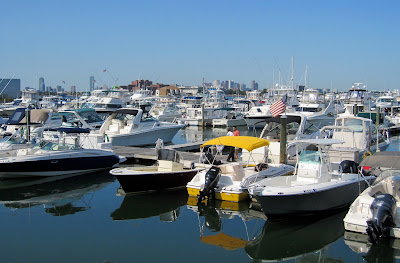 After our walk, we met two more friends at Marina Bay for lunch. Life is good!

Posted by Janice Smith at 6:11 PM No comments:

That's an unusual title . . . I'll explain further down in this post.
Yesterday, I attended a conference for people facing life after cancer treatment. The conference held in Quincy was called "The Art of Living Well: Life Beyond Cancer" sponsored by the Friends of Mel Foundation. This foundation was founded in memory of Mel Simmons, who lost her battle with breast cancer in 2005.  Perhaps you have seen the bright, colorful, beaded Mel bracelets that some women wear. According to the program booklet, the foundation has to date given $3,000,000 to fund cancer research, education, and support. The topics of the various sessions focused on important issues for cancer survivors. 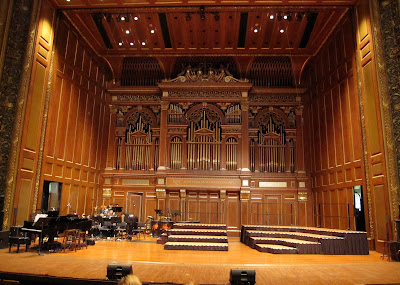 Laster, I attended the "Together for Life" concert of Voices of Hope at Jordan Hall at the New England Conservatory. What a glorious night of singing it was!  Joining the Voices of Hope were Livingston Taylor and Candy O'Terry from Magic 106.7. She has a beautiful voice! She had moderated a panel discussion earlier in the day at the conference. When she had stepped up to the mike, she sang an amazing a cappella version of "Amazing Grace."  The Andover High School choir also performed.I had never heard of "Voices of Hope," but according to the program notes, the mission of this group is "to aid in the fight against cancer by raising our voices in song. Through song, we celebrate those we love, remember theses we have lost, honor those who fight, and rejoice for those who survive. With music as our voice, we raise awareness and funds to support those who conduct the research and create the hope of finding a cure for generations to come."
Now to the title of this post.  This morning before going to Mass, I was out in the backyard with Emma. From the corner of my eye, I spotted something strange in my flower bed. A small section of flowers was moving crazily while all around the rest of the flowers were calm. I couldn't at first figure out what was going on. On closer inspection, I found a monarch butterfly hanging upside down caught in a spider web, and the butterfly was thrashing around madly trying to free itself.  I gently broke the web around the butterfly while I cradled it in my cupped hands. The sticky strands covered the butterfly's wings, so I oh so gently tried to remove the stringy strands from the wings. Unfortunately, when the butterfly closed its wings, the remaining residue prevented it from opening them again. I tried to dab a bit more off the wing with my fingertip. I placed the butterfly on a nearby butterfly bush not really expecting much, but after a few moments it fluttered a short way to another blossom. When I returned to the bush after playing a bit with Emma, the butterfly was not to be found. I, of course, checked the bush and the ground below, but thankfully there was no sign of the butterfly. It was a really unusual experience and I'm glad it turned out so well. :-)
Update: Today there were five monarchs fluttering about in my garden this morning; I can only hope one was the butterfly from yesterday.

Posted by Janice Smith at 6:38 PM No comments:

Tonight I attended a meeting of the Grateful Threads, a quilt guild at Heart in Hands quilt shop in South Weymouth, MA.  As usual, there were lots of laughs and lots of wonderful quilt pieces shown. The air was still very warm, thick,  and humid when we left just after 9:00.  For that reason, Emma and I have taken refuge on the sunporch where the overhead fan makes this room quite comfortable.  I thought I would share with you some flower photos. 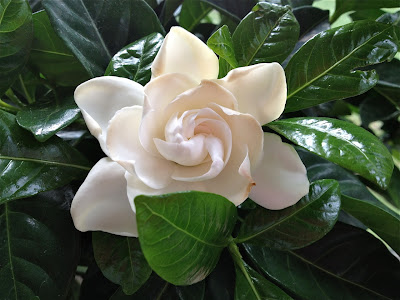 About three weeks ago, the UPS man delivered a rather large box to my door. For the life of me, I couldn't imagine what I had ordered. It turns out that it wasn't something I had ordered, but rather a  gift for me. Inside was a lovely gardenia plant. I had repaired someone's beloved, worn, patched, antique quilt, and this was sent as a thank you. The directions said the gardenia plant needed bright light, and it appears to be thriving on my sunporch. I just have to be sure to water it each morning. 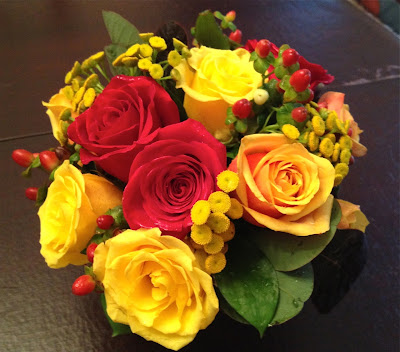 Then on Wednesday I opened my front door to find this absolutely gorgeous rose arrangement which was sent by my godchild to thank me for helping her pack up and sort through some things in her mother's home.  I really didn't do enough to warrant this, but it sure put a smile on my face.
I haven't done a thing in my gardens lately. I always seem to start the season out strong, but gradually I lose interest. This year I am blaming it on all the heat and humidity that we have had. One touch of color is provided by my neighbor's morning glory vine which has come creeping over the fence. 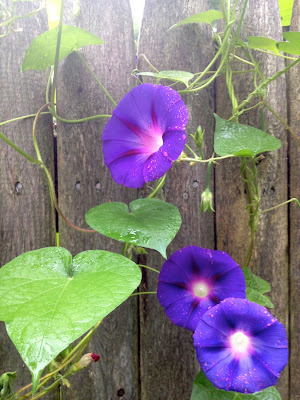 The sedum, too, is in full bloom attracting many, many bees and butterflies. This was just a quick grab shot with my iPhone. I didn't even realize Emma was also checking out the flowers. 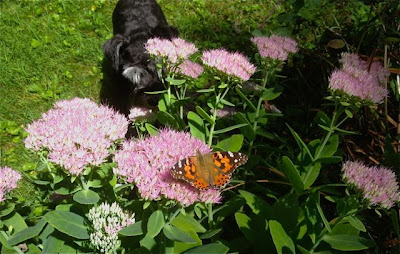 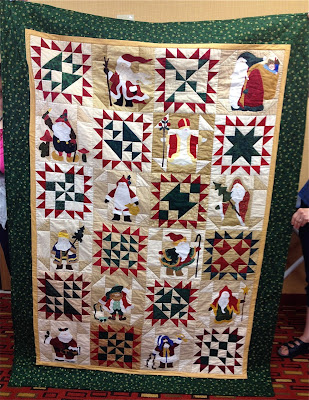 I'm thrilled to report that the Santa quilt upon which I have been working on and off for five years is done. I finished the binding and added a few embellishments today at a quilting get together. This block of the month was called The Kinship Series: Classic Santas by Susan Garman. Here are a few close-ups. 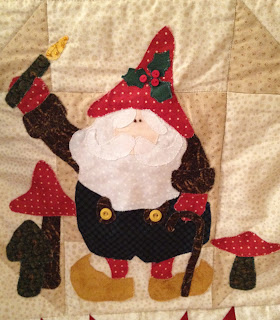 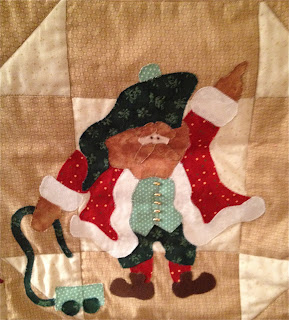 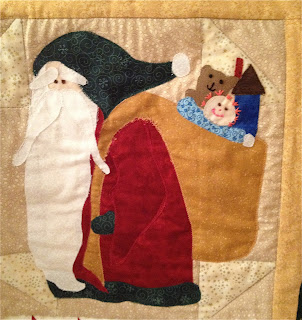 Also, today was Emma's last session in intermediate level at PetSmart in Braintree. Here she is with our terrific trainer Jenna whom Emma just loves. I took two photos, and Emma is a blur in both. It must have been all the excitement:-) 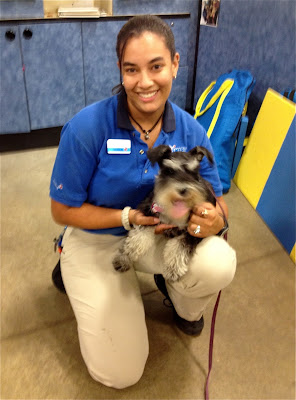