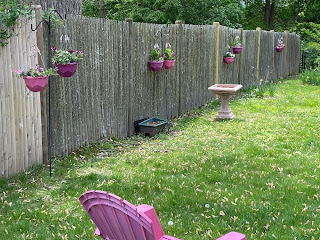 It’s true. I have been a very busy bee. On Friday, I assembled eight hanging pots for along the fence. I purchase flats of Wave petunias, verbena, and other things that caught my eye and mixed and matched them in the pots. Probably three or four years ago, I purchased these pots with flowers and beaded hangers on clearance at Lowe’s. Originally, there might have been ten, but they are pretty thin pots and two have not lasted. Still they do not owe me anything, and I love the spot of color they provide.

In the fall, I had plants in the bird bath, but I decided to use it as a bird bath again even though it is a pain to clean. Though it may appear to be aged stone, don’t tell anyone but it is made of a heavy fake material. No sooner had I removed the dirt, scrubbed it clean, and began working on something else did I turn to see one robin sitting on the fence and another on the rim of the bath. “Where’s the water?” they seemed to be asking, so I obliged them straight away. Two grateful robins were thus able to have their Saturday night baths. 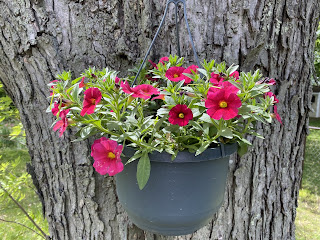 Besides these eight hanging pots, I made five more and filled this wrought iron chair which had belonged to my grandmother in days way, way long ago. 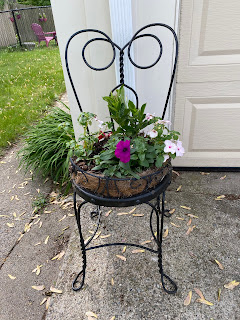 In addition to all this, I planted a double pink knockout rose. 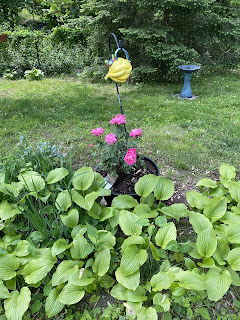 Yes, it is early spring and so I am filled with gardening enthusiasm. I have plans. . . Indeed I do. First up, clean and mulch my small garden (8’ x 10’.) Then work on the strip along the front of the BIG garden. Finally, once and for all, I am semi-determined to bring my BIG garden under some king of control. Now, I write this every spring and have acknowledged that “following through” isn’t necessarily my strong suit, BUT this year will be different. :-) Tomorrow bright and early, I am going to purchase bags of  mulch. With apologies to Field of Dreams . . . if I buy it; I will spread it. Fingers crossed.

Have a safe, creative, happy week and wish me luck that I do indeed follow through on this year’s gardening plans. :-()