Super Bowl Bound and Brrrrrrrrr!!! It's Cold Outside!!! 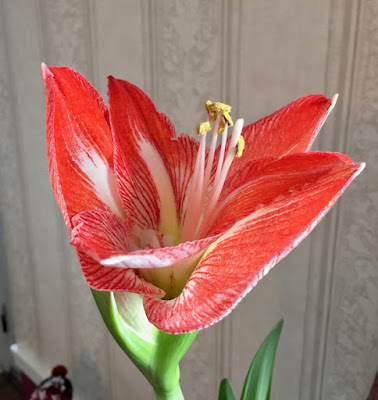 On a frigid day such as today, this amaryllis adds a much needed touch of warmth and color. For those not from this area, let me just say that we are covered in ice. I don't plan to go anywhere until Thursday when hopefully, warmer temperatures will work their magic. I'm so glad my backyard is fenced for Emma's sake as both the back and front stairs are accidents waiting to happen. The  pet safe ice melt has done nothing, but on closer inspection I noted that it doesn't work below 10F. That explains it. I bundle up Emma and out she goes for a few minutes by herself.

It may be frigid outside, but our hearts are warm with excitement, pride, and joy. The New England Patriots are headed to the Super Bowl for the third time in three years. Beyond Amazing!!! Nothing could possibly motivate Tom Brady and the team more than being called the underdogs for yesterday's game. Really???  Tom Brady has been to the Super Bowl nine times!!! What were they thinking??? Anyway it sure worked in our favor. It was an incredible game as was the Saints/Rams game before it. Truly a great day for football, and did I mention that the PATS won . . . Super Bowl hoopla here we come. [Hoopla . . . a great word and not used often enough. Being a word geek I just looked up its etymology "Hoopla from the French  . . .  hoop la` first used 1865-1870, a command {as to a child}, move take a step.]

Okay, what about all the things I was going to accomplish this weekend? Well, as you can see my cutting surface has been cleaned off!!! That's a start. Whoopie!!! 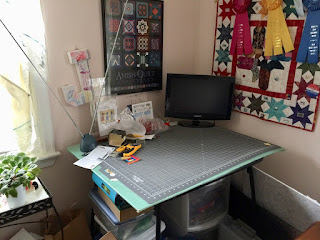 I also managed to straighten out some of my threads. I sorted it by color families, not by type. My other larger spool and special threads were already organized. 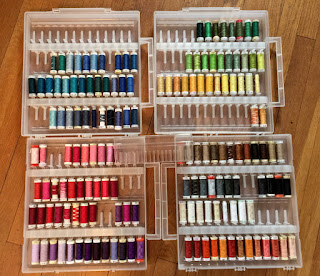 I was then about to start sewing Saturday when I realized that I had to make a dash to 4:00 Mass; the pastor said it looked like Christmas Eve as all the pews were nearly filled with the storm approaching. :-)


True confession time: while I was recuperating from BC, I went through many, many magazines and culled articles that I wanted to save. I was positive that I had purchased a large binder, but try as I might, I couldn't find it anywhere. . . not in any of my bookcases . . . not buried under projects . . so, the other day I bought another one. Look closely at the cutting table photo. Yup! There's the big, beautiful turquoise binder practically in plain sight under the cutting table. Please tell me that I'm not the only one who does things like this. :-)

Did I get any sewing done at all? Yes a bit, but I'll show that in my next post. Stay warm and safe.
Posted by Janice Smith at 11:51 AM

I was sad that the Super Bowl game won't be a Saints/Patriots rematch. But, now it is easy to pick. . .Patriots all the way!!!

Can you imagine how upset Saints fans must be after that horrendous “non-call”? I, too, was hoping for a Saints vs. Patriots game (with the Patriots winning, of course. :-()

Mine took a very long time to bloom . . . two big leaves and then nothing for a month. Have faith and hopefully yours will bloom soon.