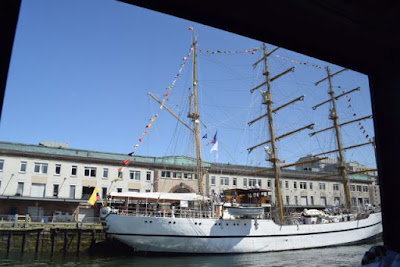 Ahoy, mates!!! Yesterday, my friend Marilyn and I spent a wonderful afternoon on the Spirit of Boston cruising Boston Harbor to see the tall ships in port taking part in the " Rendez-Vous 2017 Tall Ships Regatta," a trans-Atlantic race spanning the United Kingdom, Bermuda, and other locations. Boston is the only U.S. port in the race." (*Information from the June19, 2017 issue of The Patriot Ledger.) This leg of the race is called Sail Boston 2017.

After a buffet lunch, I went up on deck to capture these images. 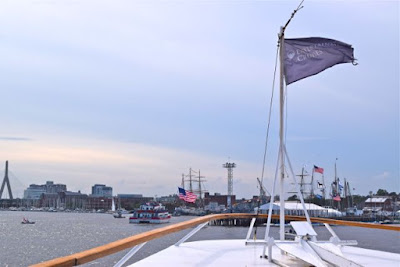 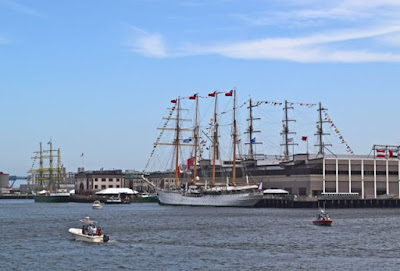 Here's a schooner with Fort Independence and Castle Island in the background. 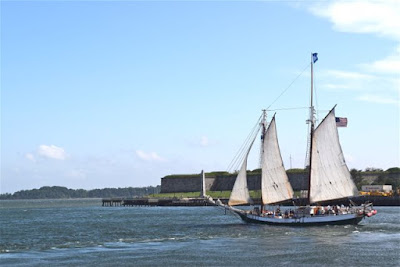 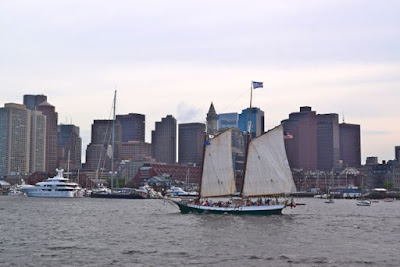 If you are not from this area, let me just say that by land or by sea, Boston is a beautiful city, a mixture of the old and the new, with a respect and an appreciation of its location on the water. 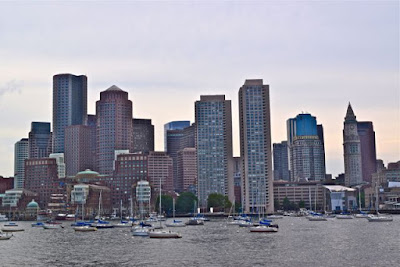 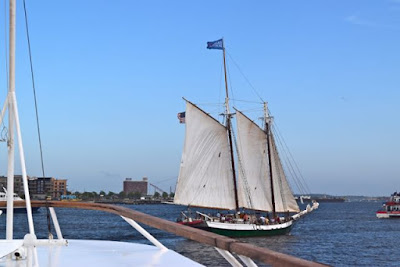 The Eagle with a naval vessel pulled up nearby over in Charlestown. Regretfully, the USS Constitution, the oldest commissioned frigate in the navy is currently in dry dock for repairs, but its sturdy, proud oak masts were visible in some photos. 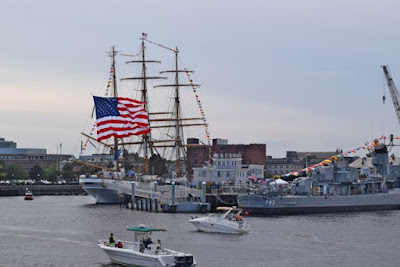 My  favorite photo of the day was this one of the U.S. Coast Guard's training ship, the Eagle, with our flag fluttering in the breeze. 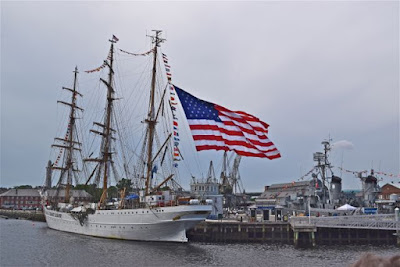 The Eagle, a 295-foot-long tall ship was taken by the U.S. from Germany as reparation following World War II.

At the end of our cruise, we had one hour before heading for home, time enough to go on board just one tall ship. I'll share those photos in my next post.

Note: Security was tight. To board the tall ships, you have to pass through a metal detector and have your bag checked, but the lines yesterday were short. Members of the Coast Guard with their dogs along with State Police officers were out in force to assure security. The ships do not leave until Thursday for the next leg of their race, so there is still time to visit the ships. I have gone to see the tall ships each time they have come to Boston, and it is always incredibly special.

How cool to be able to see the tall ships up so close on the water! I loved the photos with the flags best. I see a flag blowing in the wind and I want to say the pledge of allegiance or sing the Star Spangled Banner. . .I'm a true patriot of the USA!

I feel the same way, and that large flag was magnificent!