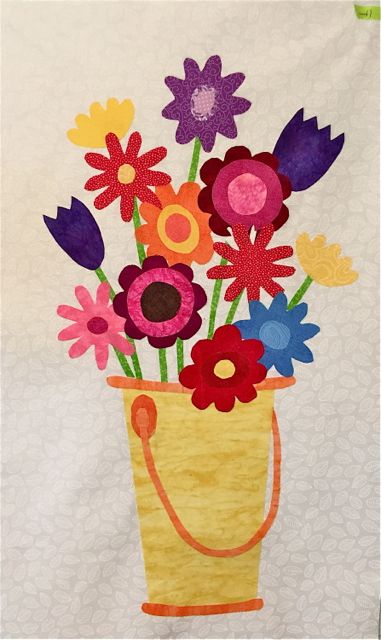 On this gloomy, rainy day I thought I would brighten things up with a peak at the quilt on which I am currently working, Garden Quilt, an Amy Bradley design. 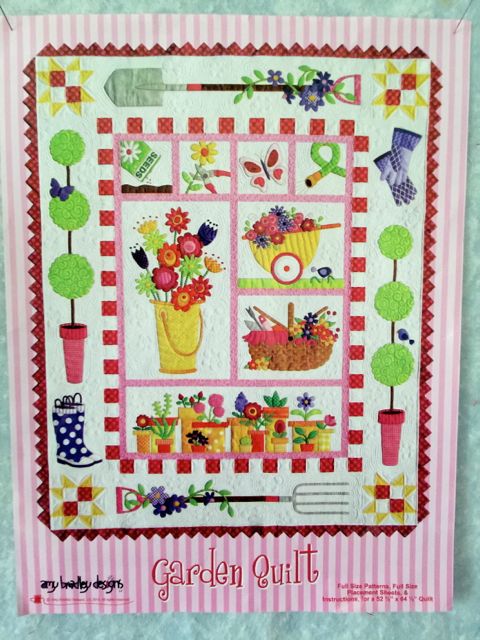 I'm in the process of preparing the eighteen blocks which I will then machine applique with a narrow zigzag stitch. It takes a while to prepare each block, but this happy, fun quilt will make it all worthwhile.

Speaking of fun, yesterday was an early release day for my godchild's children, so we had "Ladies Lunch." After a meal at a local restaurant, we headed to a large, wonderful playground in Braintree. Five or six inches of snow remained on the ground, but with their snow pants and boots it didn't spoil their fun. Of course, later there was time to play with Emma who is crazy about them. It was a really fun afternoon as it always is when they come to visit.

Pansy update: Remember the pot of pansies that I brought in the other day? Well, after brushing off six inches of snow, I had brought them down to the cellar and put them in one of the large soapstone sinks next to the washing machine. Yesterday morning when I was putting something away, I checked and was pleased to see that the pansies were doing okay. Well . . . that is until a few hours later when I decided to throw in a load of clothes. You guessed it. I had totally forgotten to remove the pot. The poor pansies were assaulted by wave after wave of soapy, cold water from the washing machine hose which empties into the sink. Thank goodness it was cold water. Those poor pansies. . . They don't look too bad after all that they have been through, but I'm going to let them recover on the window sill before moving them outside again. By the way, the pansies in the front yard around the light pole seem to have weathered the snow, cold, and today's pouring rain just fine. :-)

One more thing . . . Tuesday night I attended a performance of Meet Julia Child! sponsored by our town library. Oh my gosh was it ever funny!!! People were laughing so hard that tears were running down their faces. I mentioning this in case you ever see that this is being offered again locally. The incredible actress who portrayed Julia Child was Lynne Moulton of The Delvena Theatre Company from Lynn, MA.
Posted by Janice Smith at 2:07 PM